The Bridge to Belle Island by Julie Klassen: Review 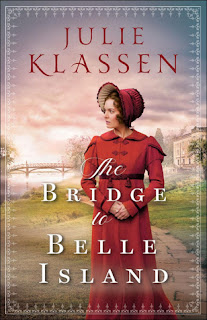 After a humiliating mistake, lawyer Benjamin Booker resolves to never again trust a beautiful woman. When an old friend is killed, the senior partner isn't satisfied with Bow Street's efforts and asks Benjamin to investigate. Eager to leave London for a while, Benjamin agrees. Evidence takes him to a remote island on the Thames, a world unto itself, shrouded in mist and mystery. Soon he finds himself falling for the main suspect—a woman who claims not to have left the island in ten years. But should he trust her?

On Belle Island, Isabelle feels safe and leads a productive life, but fear keeps her trapped there. When Mr. Booker arrives with news of her trustee's murder in London, Isabelle is stunned. She has not left the island, yet she has a recurring dream about the man's death. Or is it a memory? She had been furious with him, but she never intended...this.

When a second person dies, and evidence shockingly points to her, Isabelle doesn't know who to trust: the attractive lawyer or the admirer and friends who assemble on the island, each with grudges against the victim. Can she even trust her own mind? While they search for the truth, secrets come to light and danger comes calling.

I've been an ardent Julie Klassen fan for several years, and this book didn't disappoint. It sort of marks a return to some of her previous, standalone titles after the Ivy Hill series. In fact, it reminded me in some way of her previous titles, The Tutor's Daughter and The Girl in the Gatehouse.

Klassen is known for her unusual Regency stories, with mystery subplots and detailed settings. Which often explore little known aspects of 19th century history, culture and society. The Bridge to Belle Island is very much cast in this mould: its set in a tiny Island in the river Thames. Although fictional, there are hundreds of such islands in reality.

Isabelle and Benjamin were both well-drawn characters. Though suspicious of each other at first, I think their emotional problems and connections with family draw them together. Benjamin suffers from crippling vertigo, and Isabelle suffers from panic attacks if she tries to leave Belle Island. Bought on by memories of what happened to her family and rumors of a curse.

Both are sympathetically portrayed, however. I think I also appreciated the fact that the hero and heroine of this story were rather older than they usually are in stories of this kind. Too many romances write off older characters, and whilst they're still under 40 I liked this little twist on convention, and I honestly found it made the characters a little more relatable.
There was also an interesting cast of supporting characters, although I found Rose her fiance a little on the stale side.

The slow burning romance story is not central to this novel, which is fleshed out with the central mystery, as well as intriguing details about the legal system, medicine and traditional crafts in in 19th century rural Berkshire. The struggles and concerns of people living on a small island river island also seemed credible: flooding and storms would be a much bigger deal for them than those on the mainland. There's also a hint of smuggling, which wasn't just relegated to Cornwall.

Although its appears simplistic, the central mystery ends up having enough twists, turns and suspects and motives aplenty worthy of an Agatha Christie novel. The inspirational elements were also well handled: not too preachy but certainly there.

Overall, The Bridge to Belle Island was a wonderful and impeccable researched Regency novel, well on form for this established author in the genre. The only slip ups I noticed were a couple of uses of the term 'candy' and 'dessert'. These are only minor things though, and didn't detract from the story.

Recommended for all Regency and Historical Fiction fans. This would also be a great introduction to Mrs Klassen's work for new readers.

Grateful thanks to the publisher and their representative, including Anne Rogers for sending me a copy of this novel. I was not required to write a positive one and all opinions expressed are my own.

Labels: England, Julie Klassen, Rating 4 and a Half Stars, Regency