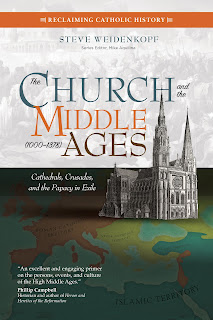 History often identifies the Middle Ages as barbaric, superstitious, and bloody. Many secular historians classify the Catholic Church of the time as omnipotent and overbearing.

In reality, the Church provided the world with a common way of life, a common purpose, and unity. In The Church and the Middle Ages (1000-1378), historian Steve Weidenkopf explains that the medieval people were intensely faithful and that it was an era of grandiose adventures and brilliant advancements in human achievement. The actions of the faithful men and women of this period and their accomplishments reverberate to the modern day.

With vibrant accounts of pivotal events and inspiring stories of the people who shaped the Church during the eleventh through fourteenth centuries, Weidenkopf provides a clearer picture of an era where critics used events such as the Crusades and the relocation of the papacy to France to undermine the Church. The period also provided the hallmarks of Christian civilization—universities, cathedrals, castles, and various religious orders.

Weidenkopf also chronicles the development of Christian civilization in Europe and explores the contributions of St. Bruno, St. Anthony of Padua, and St. Bridget of Sweden.

In this book, you will learn:

Every Protestant or Evangelical who writes Medieval Fiction, or just wants to understand the period needs to read this book.
It presents the real story of the Church in Medieval Era, covering everything from heresy to the Crusades, to scholarship and education, and it has sections devoted to the major personalities and events of the nearly four centuries covered. Be warned: almost everything on all these subjects is contrary to what many of us (I refer to the Evangelical community) have probably been led, or raised to believe.

Massacres and witch burnings were not the official policy of the church, nothing like "millions" of people were burned for heresy, and neither was that policy. Burning was actually the secular punishment for heresy, and was not used often. This book actually goes into the laws surrounding it, and some of the beliefs of the actual "heretical" groups.

The sections on St Francis of Assisi and his contempraries, the Franciscan movement, as well as some of the church reform movements were also very interesting. Now, some might be skeptical because of the Catholic publisher, but everything looked well-referenced (from various history books) and the author came over as truly objective. He wasn't afraid to criticize certain figures but also gave praise where it was due.

Prepare to be challenged and gripped if you read this book, but to finish it knowing a lot more. You won't regret it.

Thanks to the Publisher and Netgalley for approving my request for this title.