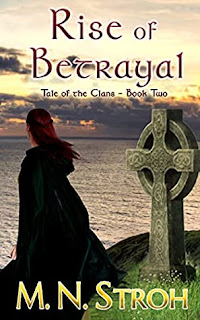 One brash act forced her to flee her clan. Now, after years in hiding, she risks exposure to the man whose brother is dead because of her.

Nessa’s father arranges her betrothal to the son of their warmongering overlord. Horrified, Nessa realizes that marrying the rogue warrior will thrust her family into the heart of their clan’s longstanding conflict with the Danes of Luimnech.
Nessa accepts her fate until tragedy presses her to make a desperate escape, though her brash act costs her intended’s life. Now his family seeks revenge.
Sanctuary among distant kindred proves short-lived and Nessa's rescuers entangle her in their schemes. With the balance of power shifting in southern Ireland, her knowledge could pave the way for her former chieftain to claim the provincial throne. Yet, offering that knowledge may expose her identity to her estranged clansmen… and to the man whose brother died because of her.

Rise of Betrayal was an excellent continuation of the story which began in Man of Sorrows. RoB though is very, very different from that book. Whereas MoS was more of a romance or had a strong romance subplot. This book does have romantic elements, but it is not a romance. Rise of Betrayal is also about twice the length of the previous book and so allows a lot more time with the characters and the story.
It is more of what I call straight out historical fiction, and as such covers much darker and more serious matters including murder, treachery, war, and internecine conflicts. Early Medieval power politics were *not* pretty.

The story begins at a slower pace, but as it builds up with the war, plots and intrigue a more complex web of deception, division and ambition is weaved.
I honestly think it’s hard for authors to write books like this. Or rather to stay within the rules of inspirational fiction whilst representing the nature of events with anything close to historical authenticity. Something has to give, and its usually accuracy or characterization.
What often happens is the protagonists end up being saccharine sweet or totally flawless and spend their time delivering platitudes to the other characters. The villains are people who are simply trying to survive or navigate the treacherous political landscape. This ends up creating, in me at least, more sympathy for the latter.

This might be why a lot of my favourite Christian Medieval Fiction is self-published or not from the biggies - the major American publishing houses.
These works tend to more accurately represent the Medieval attitude towards faith, and the struggles people had to reconcile the teachings of their religion with the nature of the world and the political landscape.
I would recommend the Tales of the Clans series to any lover of historical fiction, but if you are not used to gritter and more realistic portrayals of this period you might have some issues.