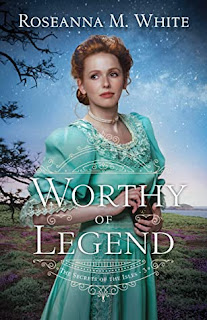 After a summer of successful pirate-treasure hunting, Lady Emily Scofield and her friends must hide the unprecedented discoveries they've made, thanks to the betrayal of her own family. Horrified by her brother, who stops at nothing to prove himself to their greedy father, Emily is forced to take a stand against her family--even when it means being cut off entirely.

Bram Sinclair, Earl of Telford, is fascinated with tales of King Arthur and the Knights of the Round Table--an interest he's kept mostly hidden for the last decade. But when a diary is unearthed on the islands that could lead to a secret artifact, Bram is the only one able to piece the legends together.

As Bram and Emily seek out the whereabouts of the hidden artifact, they must dodge her family and a team of archeologists. In a race against time, it is up to them to decide what makes a hero worthy of legend. Is it fighting valiantly to claim the treasure . . . or sacrificing everything in the name of selfless love?

Worthy of Legend was a beautiful and heartfelt conclusion to Roseanna M. White's fourth trilogy set in Georgian Britain. The Isles of Scilly, to be exact. Of course, I loved Bram. He’s a literature nerd with a secret obsession with the Arthurian Legends.

His best friend is an amateur archaeologist with a special interest in the history of the druids and the Arthurian Legends. He's a nerd like me, and he loves animals. He rescues puppies. Can this man get any more adorable? Sighhhs. Emily is great too, she’s a young woman rejected by her family who is trying to escape their reputation and the illegal actions of her brother. She struggles with her duty to love her family (and her sibling) and doing the right thing.

The title of the story is very clever. Legends are a huge part of the story, first there is the Legend of Lyonesse, a stretch of land which was supposed to extended out from Cornwall as far as the Isles of Scilly. Legend has it that Lyonesse was submerged by a giant wave in a single day as divine punishment for a terrible sin committed by the people, and all that remained were the tops of the mountains as the Islands. Yes, I looked it up. I knew nothing about the Legend of Lyonesse before reading this. Better still, one of King Arthur’s knights, Tristan was said to have hailed from the lost Kingdom. As in Tristan and Isolde.

Along with that though there is an underlying theme about the legacy of one’s family and the choices of the past. Legends are not just stories: the legacy of the past can impact the present, and what the artefact they are hunting represents can bring out the best – and worst- in people. In the end, the story is not just about the legends or the legendary artefact. This is best illustrated in a quote from the story:

“I want to believe some bit of the legends are true, and that we can aspire to that nobility. But on the other hand, . . . we’ve seen today what can happen to men thanks to greed and ambition and the lust for fame”

Emily and Bram prove themselves to be Worthy of Legend when they choose to follow the path of mercy, love, faith, and forgiveness even when greeted with hatred, tragedy, and rejection. Even when it is hard- sometimes impossible, to follow and they falter. Oh, and this series is worth it just for the presence of Mamwen, the eccentric grandmother like figure who seems to know everyone and have a certain knack for knowing what is going to happen. She’s not in this much, but any is better than none.

Recommended for all lovers of historical fiction, and those who might want something that’s different from the rest of the Georgian Downton Abbey style stories out there. This one has lost treasure, adventure, and mystery too. Also there are hardly any novels set on the small archipelago in the Celtic Sea known as the Isles of Scilly.

Thanks to Bethany House for providing an EPub of this title. I was not required to write a positive review and all opinions expressed are my own.