Review of Tahn by L.A Kelly 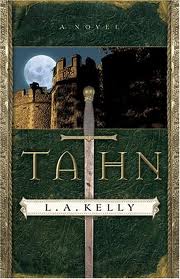 "In a dark, medieval land, good and evil battle it out. Trapped between his master's evil commands and his persistent conscience that tells him to do otherwise, Tahn Dorn finds himself in a twisting plot that threatens not only his life but also that of the lovely Netta. After kidnapping Netta from the comfort of her home and burning her castle to the ground, Tahn realizes he can't turn her over to Samis, his evil master, as was originally intended. But as Tahn launches a plan to outwit Samis, he realizes he must also face the evils within himself. Here, compelling characters deal with the real-life struggles of redemption and forgiveness. It's good versus evil in a way you've never experienced before. A note from the author: "I knew as I was writing Tahn that the story could not end until certain choices were made. Love or self-guarded preservation? Forgiveness or bitter hate? It is my hope that readers will think about such choices in their own lives. I hope they remember Tahn and see past the surface of the next person they meet. I hope they see a potential hero in every lost and wayward child and pray accordingly. Then Tahn and I will have done our jobs."

Opinion: This was a great Christian story (which could appeal also to non Christians) about forgiveness, hope redemption, and the triumph of love and faith over evil. It was a sweet romance novel with some memorable and original characters. The story is good overall, although it did seem to be a little corny and cliched in places.
One annoyance for me was the language of most of characters, which was riddled with modern Americanisms and colloquialisms. Content such as this is which the characters are supposed to be Medieval Europeans is something I find rather cringe worthy, and I don't think this novel was any exception.
Then were also some  scenes which seemed very unrealistic and implausible , like one in which the Protagonist Tahn scales a castle wall with a long plank of wood which he somehow managed to carry with him.
The secondary villain, Baron Trent left much to be desired. His character (and that of his son who comes along soon after his death) both seemed to be modeled on the stereotypical American depiction of 'English' aristocrats as seen in many movies, right down to their 'posh' accents and language crammed full of long high-register words. Yet despite the attempt to make them as nasty as possible, most of the time they simply seemed , ludicrous absurd and downright useless.

Christianity/Morality: Tahn the male protagonist is essentially a trained assassin and hired killer/bandit, and part of a band of such who serve under the principal villain Samis. For this reason he has lived in life of physical abuse and incredible violence, and commits a number of acts of violence in the novel, though these are often defensive, before be accepts Jesus.
Other characters also kill or commit acts of violence against one another, though none of it is particularly graphic.

As stated above, Tahn is but one of many assassins trained by Samis all of whom are children, and most are subjected to physical abuse. They are also kept subservient through drugs, so there are several references to an 'opiate tincture' in the novel, and at least one of the characters is addicted to Opium in this form, though manages to give it up in the end with the help of the heroine Netta.

The theme of redemption is an important aspect of the novel, and there is a plain presentation of the gospel. Netta is a strong Christian who often shares her faith with the waif children and Tahn, and leads a number of them to Christ, but Tahn is initially antagonistic believing that he has committed too many unforgivable sins, and has long been told he is damned, something which haunts him in his dreams. though eventually he does accept Jesus towards the end of the novel. Some readers have complained that the novel is too 'preachy' because of such content, but I think such really comes with the territory in a Christian novel, and is really to be expected.


History: The Medieval setting of the novel seemed to be superficial, unconvincing and in many places weak.
There did not seem to be any real 'sense of period' in the novel, and it does seem as though the late author may not have done very much research into it.


By far one of the most the most annoying historical aspects was that, as well as imposing some modern values and standards onto the past, some of the characters displayed what appeared to be a rather dismissive and sometimes contemptuous attitude towards for certain traditions, customs, conventions, polite social graces that were common during this period.


The book is a good light read for fun, but it might not entirely satisfy the tastes of those who prefer such novel to be more  historically 'accurate' and plausible.