'Choices of the Heart' By Laurie Alice Eakes 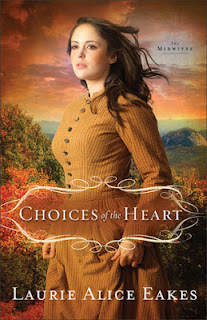 Choices of the Heart was another first with a new author for me. Once again, I read this title the third in a trilogy without having read the other two. Perhaps I really ought to start reading series at the beginning as intended!

The story itself was good enough, with a fairly original concept and some interesting characters. It was not hard to sympathize with poor Esther, whose sweet and honest nature made it seemed really unlikely that she could have done anything that bad, yet was effectively driven out of her hometown by the hatred of neighbours. The device of the feuding families also added tension and danger .

Esther, though hurting and in many ways still afraid was a strong and bold enough character, as were the two male leads Zach and Griff, both of whom were manly men with a soft side who seemed to genuinely care for the city girl thrown into their midst.
Some of the minor characters were also likeable for their unique characteristics or personalities, like Zach’s sister, with her desire to like the well-bred uptown ladies, and the mischievous younger children. The elements of faith, and meaningful messages also seemed to be woven well into the story, with some passages that really spoke to me. Some of the descriptions of Medical practices and herbal or ‘folk’ remedies were  interesting.

Yet Choices of the Heart is not a story I would list among my favourites. It was pleasant and enjoyable but probably not a book I liked enough to want to keep and read over and over. Like another book I read this year, it seems to be that this novel it about standard fare for this genre. There were some elements that could make it stand out, like the heroine being a member of a profession that doesn’t seem to get much coverage.
Yet it also seemed to be something of a (if readers can forgive the term) ‘fluffy’ romance. The hurting protagonist having to overcome their personal demons, emotional angst and painful past or risk losing the opportunity to embrace true love is a formula that may have been used before.

Really also, Esther’s behaviour did at times seem a little inconsistent, with her being afraid of getting close to any man one minute, then letting him kiss her the next.
Some things seemed a little too quick and easy, such as Esther’s overcoming of her religious doubts. As I recall in one place she was convinced God had abandoned her entirely, then not long afterwards realizing this was not the case and getting reconciled with Griff.
A little bit of a too easily and quickly wrapped up resolution perhaps, after all the tension and high emotion? This tension itself could be argued to be a little too dependent on overly dramatic events, with one stabbing and one shooting, a fight, an assault and a fire in about 100 pages.

Also, though I understand the importance of forgiveness to the story, it did seem perhaps a little implausible that some of the characters were a little so willing to love and forgive and forgive another character because she was ‘kin’ considering how her actions resulted in so much heartache, pain and death.

Overall Choices of the Heart was a good read, but it is still not a period setting that I find myself too enamoured by, and the story did always seem to really stand out from a lot of others in the genre.

I received a copy of this book free from the publisher on request for review. All opinions expressed in it are my own.