What makes a Lady- In the Victorian Times?


‘Every Lady is a woman, but not every woman is a Lady’- so a wise man said.

Author Michelle J Hoppe has a website with a vast array of tantalising links and facts including some interesting insights into the appropriate manners, conduct and etiquette of a respectable Lady in the Victorian and Regency era. Derived from contemporary sources and books, the section entitled ‘Manners for Women’ includes some useful advice (but also certain actions that seem to be taken as a given- perhaps assuming that people do not have to be advised to do these things).

Amongst them it is said that “Proper young ladies do not indulge in cosmetics, hair-dyes or other forms of insincerity in personal appearance.”[1] Perhaps this one could be summed up by saying ‘Be yourself’ or ‘If you have natural beauty, why try to use artificial means to enhance it’? Sadly not all of us are, but there seems to be some sense in this advice. 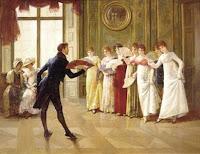 Following on “An unmarried young woman, up to the age of thirty, must always accompanied by a chaperone when she goes out.  This is to ensure that she is innocent, and to compel others to respect her innocence…. An unmarried woman could not be alone in a room with a male visitor, even in her own home. Nor could she go anywhere with a man to whom she was not related unless a married gentlewoman or servant accompanied her.”[2] Kissing almost certainly seems to have been out of the question unless “among near relations and dear friends.  It is given on the cheeks or forehead, and rarely in the public eye.”[3]
There were also certain conventions regarding conversation a lady “never uses vulgarisms, flippancy, coarseness, triviality or provocation in her speech.”[4] Such as this might be regarded as uncouth even now, but there was more as “Scandal is the least excusable of all conversational vulgarities.”[5]
This is not to say that women were expected to be quiet, on the contrary “A good talker should be possessed of much general information, acquired by keen observation, attentive listening, a good memory, and logical habits of thought.”[6] Of course, some expressions were not acceptable, for instance “A lady avoids all exhibitions of temper before others.  Whether grief or joy, emotions should be subdued in public and only allowed full play in private apartments.”[7]
When out and about, there were also other expectations, “A lady never forms an acquaintance upon the street, or seeks to attract the attention or admiration of persons of the opposite sex.”[8]

A lady never looks back after anyone in the street, or turns to stare in a public place.  She should never walk alone in the street after dark.”[9] The last one definitely seems very sensible. Finally if a Lady was not walking, “a lady rode side saddle, alternating sides each day so as not to develop an overly enhanced buttock on one side.  Riding astride was looked on as risque.”[10]

The manners and social conventions of past societies can indeed shed an interesting light upon them, but also on the way they are depicted in literature today. The Regency period is a popular setting for Christian Historical Novels today, but does the behaviour of Upper Class protagonists in such novels adhere to such customs and conventions as those outlined above?
I for one know of one series in which one of the female leads flouted pretty much all of these conventions, behaving in a manner that was downright shameless, yet was still considered a ‘Lady’ by the other characters. Then again, is was not set in the Regency period.