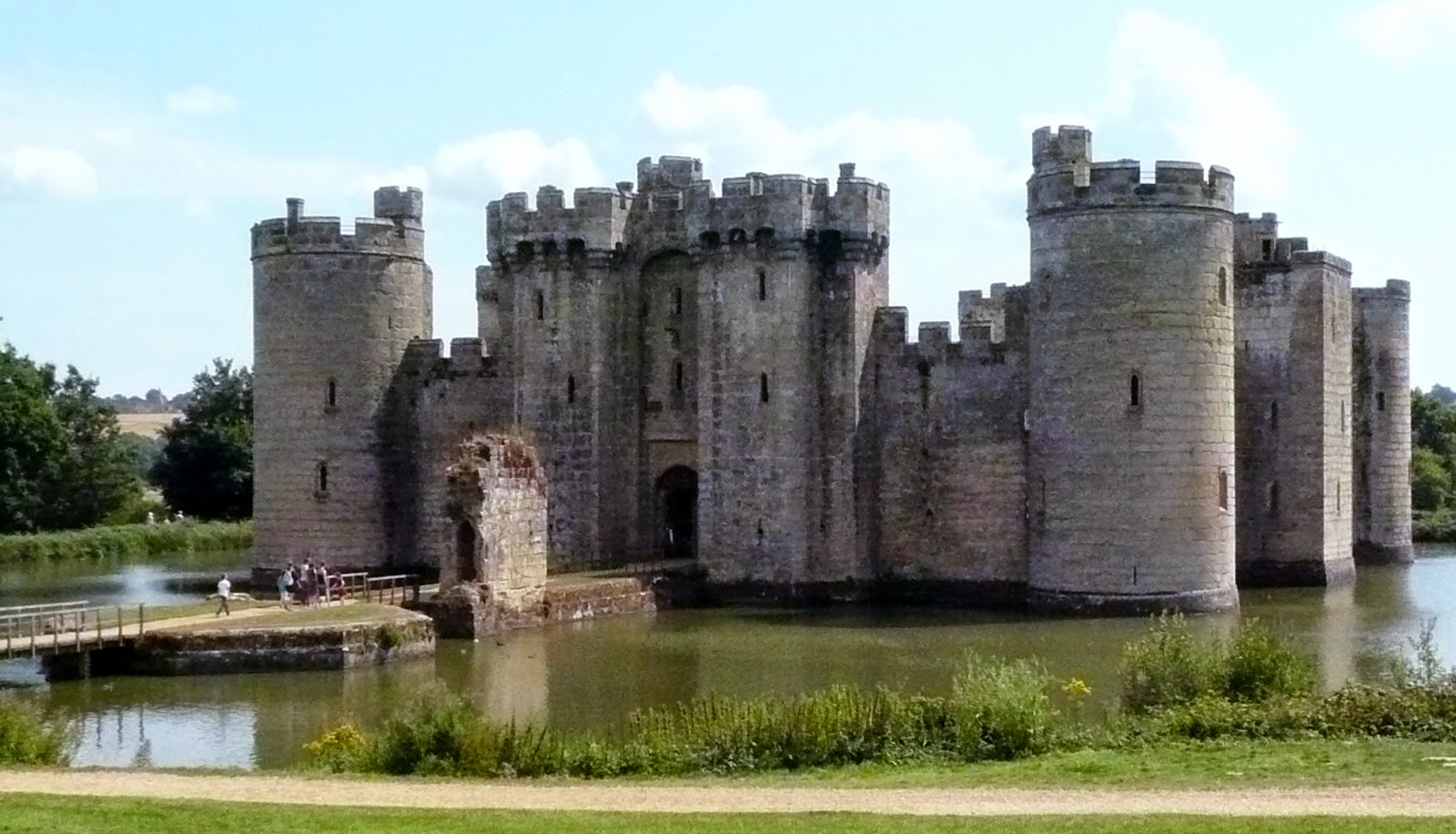 Bodiam, one of the most picturesque and emigmatic castles in England often appears on the covers of books and magazines. Including  those of Alicia Willis Comrades of Honor series-and its no wonder. What Bodiam is lacking the size and imposing structure like the great fortresses like Beaumaris on the Welsh Borders, it makes up for in looks.

Undeniably and unashamedly gorgeous, part of Bodiam's attraction may be that it is the archetypal Medieval Castle, sometimes described as a 'fairy-tale castle'. Indeed, on a cold morning, with mist rising from the moat, if the photos as anything to judge by, the castle does indeed have an air of the fantastical.
It even sports a few monsters- well at least large carp who may be seen in the moat vying for food from visitors with the greedy ducks. ﻿﻿
Bodiam was the brainchild of Sir Edward Dallingridge, and country knight who lived in the late fourteenth century and made his fortune in the Hundred Years War with France.
His family were medieval social climbers, originally of peasant stock the first notable Dallingbridge was, in fact a humble forester. [1]﻿﻿﻿
﻿
﻿
Edward himself increased the families' wealth with a good marriage, and quite possibly, Edward was associated with the notorious 'free companies'. These bands of marauding soldiers who ravaged and burned their way across France, looting, pillaging and ransoming, though technically owing allegiance to none. It’s a sobering thought that pretty little Bodiam was essentially 'built on blood money' and such ill-gotten gains.[2]
This was not the only way in which the building of Bodiam took liberties, for Dallingridge had originally applied for a licence to 'crenelate' or fortify his manor house. Not so uncommon in the Later Middle Ages, but instead of building walls around his existing manor, as the licence allowed, with the crenelated battlements archetypal of the period, he built and entirely new castle from scratch. Amidst the turmoil of war, and by the brash, ostentatious ambition of its creator, Bodiam was came into existence, to survive for the next 600 years. 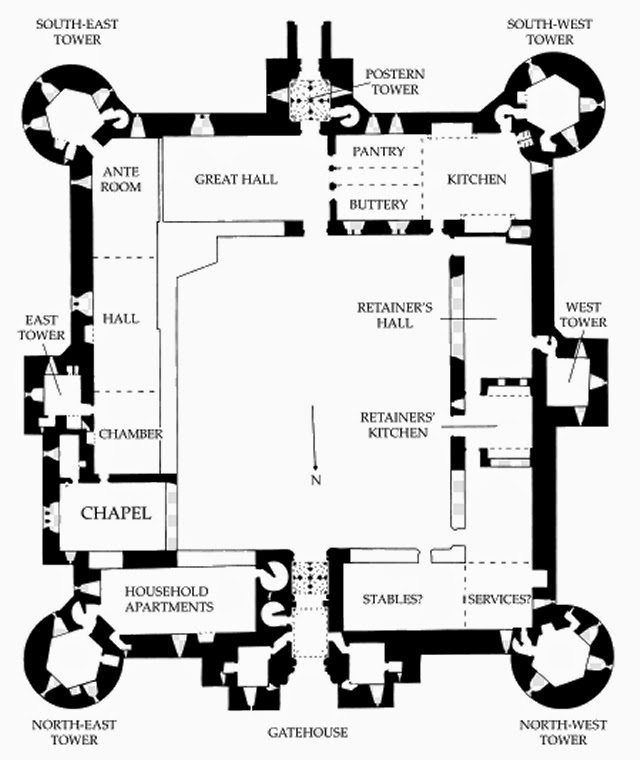 Historical background aside, Bodiam is a fascinating place from which much can be learned of the period, despite the ruinous state of the interior. The Castle was built around a large, square central courtyard, which is apparent from some of the photos I took on a higher level. The floor plan above also helps put flesh on the bones, to reveal what some of the rooms would have been in their heyday.

The use of this room, located on the bottom right of the square was fairly obvious, judging from the large, central arched window divided into three and the raised platform. It was, as you may have guessed, the Castle Chapel. The fourteenth century falls into the sub-period referred to as the 'Later Middle Ages' by historians. It was a time when private chapels were becoming increasingly common on great houses, and faith was becoming, for some, more personal and inward. Castle chapels were not generally of this form , but were usual even in the fortresses of the 11th and 12th century.

The main event, however, was probably the Great Hall, located on the opposite side of the castle from the main gate, and just right of the Postern Gate. The food served in the hall offered the Lord of the Castle an opportunity to display his wealth, affluence and generosity as a host. This was where the important and favoured guests wined and dined.
There was, in fact, another such hall on the left hand-side of the Castle for retainers, who often ate in the Great Hall, but in this case had one of their own.

At one end of the hall are visible today three arched doorways, They formed a part of the Castle known as the screens passage prominent today, these would have been more discreetly concealed in the 14th century, with a wooden screen, as well as the stone one. They led to the service area for the Great Hall.
A pantry and buttery were located through the left and right archways, the buttery, in spite of how the name may sound, was not used to store butter, but drink- primarily ale and wine. In the middle was a passage leading to the Kitchens.

There, were, according to modern floor plans like the one above, actually two kitchens at Bodiam. The main one served the Great Hall, and a second adjoined the retainers hall.
Apart from a reconstructed Great Chair, the Hall is bare and ruinous today, but an Bodiam's  hall was identical to another, surviving hall of similar date at a great house in Kent, and archaeologists have done a great job with  reconstructions of how it may have looked in Edward Dallingridge's time.

On the day of my visit, there were a series of historical talks held in the Great Hall, hosted by two very knowledgeable  costumed interpreters. The one I attended was about Medieval Hygiene, a subject of interest to me because of my hatred for Hollywood tropes of stinking- black toothed Medieval people throwing food over their shoulders.
For the record, this was absolutely not done in polite company, Medieval folk were actually very strict on table manners.
Bodiam also boasted the latest modern conveniences- quite literally. There were no fewer than 28 garderobes- the equivalent of en-suite bathrooms at Bodiam, for many were located in the extensive guest chambers. It seems Sir Edward designed Bodiam with accommodating guests as one of its main purposes.

A few of the guest chambers have been reconstructed, and with their fireplaces alongside the garderobes, would really seem as though they would have been quite comfortable and cosy. All seem to have had windows, with deep alcoves that seem to have been window seats. Useful for sewing or reading, perhaps?
The layout of these chambers also helps to account for the many arch shaped doorways next to fireplaces which can be seen dotting the walls of the castle at various heights.

Unlike other great fortresses, Bodiam was not host to any major historical events, it may have been besieged in the Wars of the Roses, but seems to have peacefully changed hands several times. During the English Civil War it was sold to pay the debts of the Royalist owner, and was 'slighted', which meant put out of use. This seems to have involved dismantling the gatehouse and inner rooms, but not destroying the Castle or its structure.
The slighting may seem like the end of the story, but, in a sense, Bodiam was fortunate, for so many of the other Castles of England were entirely or largely destroyed during the Civil War or the Restoration that followed it.
Although a ruin since the 1600s, Bodiam underwent some restoration, under various owners in the 19th century, including some work on the towers which seems to be intact today. One such owner was the famous (or infamous) philanthropist and eccentric 'Mad Jack' Fuller, who seems to have purchased the place to prevent in from further destruction. He was not the only one to see the castle's value, for a later owner George Curzon, 1st Marquess Curzon of Kedlestone is supposed to have said "so rare a treasure [as Bodiam Castle] should neither be lost to our country nor desecrated by irreverent hands"[3]
﻿
On his death in 1925 Bodiam come into the hands of the National Trust, its current owners, allowing for its enjoyment by visitors. Bodiam,  rare for its almost complete surviving outer walls, and stunning good looks, is deserving of fame. For it is a remarkable survivor and representative of those far-gone days, which fascinate and feed many an imagination today.
﻿
I hope readers have enjoyed this little virtual and pictorial 'tour', and hopefully there will be more to come in future posts.


Marc Morris, Castle: A History of the Buildings that Shaped Medieval Britain (London, 2003).