The Healer's Apprentice by Melanie Dickerson 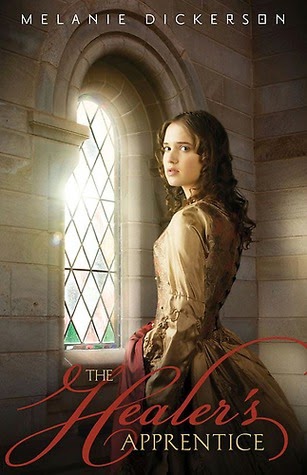 Rose has been appointed as a healer's apprentice at Hagenheim Castle, a rare opportunity for a woodcutter's daughter like her. While she often feels uneasy at the sight of blood, Rose is determined to prove herself capable. Failure will mean returning home to marry the aging bachelor her mother has chosen for her—a bloated, disgusting merchant who makes Rose feel ill.

When Lord Hamlin, the future duke, is injured, it is Rose who must tend to him. As she works to heal his wound, she begins to understand emotions she's never felt before and wonders if he feels the same. But falling in love is forbidden, as Lord Hamlin is betrothed to a mysterious young woman in hiding. As Rose's life spins toward confusion, she must take the first steps on a journey to discover her own destiny.

My third read by Melanie Dickerson (although the first book she wrote) did provide some interesting background, as two of the successive books have as leading characters the children of the protagonists. I confess to being perhaps a little obsessed with the subject of surgery and the medical profession in the middle Ages, so I’m a big fan of Cadfael and have a liking for the mystery series The Chronicles of Hugh de Singleton for its details about surgical practice and medical procedures if nothing else.
In this sense, The Healer’s Apprentice was satisfying, and in some ways a break from the norm, because the female healer was not accused of witchcraft or heresy as is the common misconception and trope in many fictional stories.

On the simplest level this was a good story, which, aside from the inclusion of the evil magician, stripped away a lot of the fantasy content to create a more historical backdrop for the story of Sleeping Beauty. That may not be according to everyone’s taste, and sometimes the resemblance to the fairy-tale was rather remote, but generally in this story the shifting of the setting to fourteenth century Germany seemed to work.

The element of Romance is arguably, essential to any good fairy-tale, or fairy-tale adaptation, yet I personally have to say I am rather going off romance stories at the moment, especially those of the fluffy, mushy and clichéd kind.
This novel did seem to be an offender with its gorgeous heroine and wonderfully handsome, dashing- and of course muscular hero. In other ways Rose and Wilhelm were strong and interesting characters, but in this way far too typical of the genre.
Perhaps inevitably for the genre, some parts were cliched and some incidents hopelessly convenient or a tad predictable.

Also, their actions were at times frustratingly inconsistent with Rose being madly infatuated with Wilhelm’s brother one minute, then turning round and considering him the most evil person who ever walked the earth the next. Admittedly, she had a reason, was of that invariably capricious breed of people called a teenager.
Her attitude towards her parents I found even harder to swallow. Like her being convinced that they could not possibly have loved her because they sent her away as a child. Or might it not have been because they wanted to protect her from the evil magician intent on subjecting her to a lifetime of torture, the central basis of the plot, and all that?

Even Wilhelm ended up looking down on them as cowardly and selfish for such a thing. I mean seriously, after all they went through, I rather think they ought to have appreciated the reasons for Rose’s parents’ choice to let her go. But no, all they do is whinge and condemn, making their response seem contrived it itself, and them immature.
Did they learn nothing at all?

Also, a few historical issues perhaps warrant mention- like the suspiciously out of place presence of the American chipmunk in the forests of Medieval Europe, and some elements of what appeared to be modern clichés and judgements. Such as Rose determined to marry for love, rather than practicality, or looking down on those who saw women only as breeding machines, or her being more ‘enlightened’ than the general populace who supposedly attributed almost every ill circumstance to demons.

Altogether The Healers Apprentice was a good and generally clean (aside from the odd kissing scene that verged on the inappropriate- or just tiresome) story for young-adults. Perhaps also in could provide a more wholesome alternative to the fairy tales that present an ambiguous picture of magic as something which can be used for ‘good’. I just prefer my medieval stories with a little more substance.