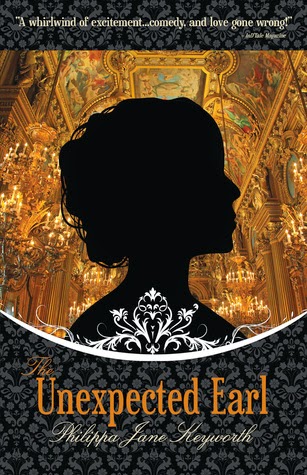 "Six years after being jilted without a word of explanation, Julia Rotherham finds Lucius Wolversley standing before her once again--unexpected, unannounced, unwelcome.

With her heart still hurting and, more importantly, her pride, Julia must chaperone her younger sister, fend off fortune hunters, orchestrate a fake engagement, and halt an elopement--all whilst keeping the man who jilted her at arm's length.

But what Julia doesn't know is that this time, the Earl has no intention of disappearing, and this time, he has more than an explanation to offer...."

Three years ago, I didn’t read regencies- at all. Since then I’ve read a few- and learned that not all Christian Regencies are equal. The Unexpected Earl ranks among the better- with faint shades of the literary great. The Lady (and spinster bordering on the old at the other side of 20- at least  by 19th century standards) who unexpectedly comes face to face with the former beau who jilted her is almost reminiscent of Persuasion, and hostility tension between the protagonists of Pride and Prejudice. A Regency that harks back to these is stepping in the right direction.

A cast of memorable and well written characters also helps- and this book has them. Julia is strong but not in the militant way that some historical heroines are who seek to rebel against society in the name of ‘freedom’. Perhaps her most endearing trait was her (sometimes biting) wit, and propensity for impulsiveness. The former extends to the writing style, with some great lines such as “Two other gentlemen, with a similar predilection for foppishness, sidled up to join with Windlesham in synchronized sneering” Wolversley, the male protagonist is a suitably brooding dark horse, though not lacking in his fair share of charm.

With such novels as this there does seem to be a danger of the storyline becoming repetitive or clichéd, and romance too fluffy and mushy to be palatable. This was generally not the case here. Aside from a couple of scenes towards the end in which the characters were rather pre-occupied with kissing or emotional attraction, the plot was mostly tight and credible. Indeed, like with her previous book, Julia could not stand Wolversley at first, In fact, she spent most of the first half of the story trying to ward him off whilst protecting her sister. Nor did she just wake up one day realising she still loved him. The process was gradual and difficult, the characters having to deal with their resentment, pride and other issues.

Mrs Keyworth is the only British author of Regencies in this genre that I know of – which has some major advantages in my opinion. One is that her work is free of the Americanisms in the character’s speech that blight so many regencies. Indeed, the American Publisher also deserves some commendation for preserving the British terms and idioms, rather than changing them.
My only major complaint (and the main reason for the lower rating) was that I felt there was little in the book that was explicitly Christian- aside from a few reference to Julia praying. She seemed to lie more often than prayed (indeed lies and deception are often central to moving the story along) and her faith did not always seem to be something that was very important or that she took seriously.

Don’t get me wrong, I don’t expect characters in Christian fiction to be perfect, and there may have been some deeper messages that passed me by- but I just expected more. Some sort of redemption, repentance, or some sort of change in the characters. The morally dubious and licentious characters seemed to stay that way- with the slightly dubious implication that the ‘goodies’ consorted with prostitutes and women of ill-repute as much as the villain- though Wolverseley did not. Also, the swearing may be an issue for some.
Overall, I would recommend The Unexpected Earl for Regency fans, but I’m not sure it really fits comfortably into the ‘Christian’ Genre. Perhaps it should be simply ranked as ‘clean’.

I received and Advance electronic version of this book direct from the publisher in return for a review. I was not required to write a positive one and all opinions expressed are my own.