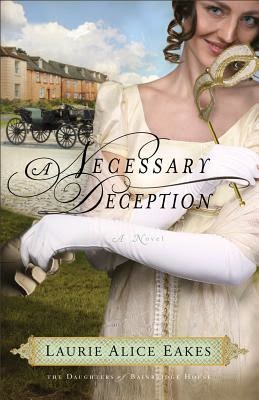 When young widow Lady Lydia Gale helps a French prisoner obtain parole, she never dreamed he would turn up in her parlor. But just as the London Season is getting under way, there he is, along with a few other questionable personages. While she should be focused on helping her headstrong younger sister prepare for her entrance at her debutante ball.

Readers will enjoy being drawn into this world of elegance and intrigue, balls and masquerades. Author Laurie Alice Eakes whisks readers through the drawing rooms of London amid the sound of rustling gowns on this exciting quest to let the past stay in the past and let love guide the future.


A Necessary Deception was, overall, a decent Regency Romance with an interesting subplot involving espionage, a smattering of political intrigue, and some incorporation of historical events and issues current at the time period when it was written, such as the Luddite insurrection and the assassination of Prime Minister Spencer Percival. At times, however, the plot twists and turns were perhaps a little too ambitious, seeming to mae the story disjointed, lurching, and hard to follow in places.
There also seemed a little too much reliance to dramatic chapter-endings and cliff hangers to maintain interest.
Don’t get me wrong- drama can be compelling, but sometimes it’s possible to have too much of it, perhaps at the expense of other literary devices like character development or depth of plot.

I also found I had some of the same issues with the story as others by this author (and many others)foremost the use of various Americanisms by the ostensibly British characters, which appeared totally out of place for the time period.
These included ‘someplace’ instead of ‘somewhere’ as is more commonly used in Britain, or a location being several ‘blocks’ away.
Or said British characters using the terms England and Britain interchangeably (sometimes in the same sentence) as if they were synonyms for the same country- which they are not. Such would be expected from American characters, but not from British ones who ought to have known the difference.

I suppose such oversights or minor inaccuracies are to be expected, given the Christian Regency genre is dominated by American authors, and aimed at the US market. However, I suppose I would like a little more realism in terms of elementary details such as speech, language and dialect, especially in a novel that seemed to be generally well-researched in other ways.
I did also question the plausibility of Lydia’s notion that a person could be thrown into the Tower for sedition at the slightest hint of any criticism of the royal family. How could this have been so when there were satirical cartoons about the Prince Regent?

As for the characters- they were developed and well-rounded for the most part, but no always easy to identify or sympathise with. Lydia’s desire to protect her family was admirable, but her initial attitude towards men was very annoying. Basically, she believed that any man who wouldn’t let a woman do what she wanted, or pursue her own interests was an evil, repressive, autocratic, tyrant – but there was nothing remotely autocratic or controlling about her demanding men give up their careers to stay at home.
An opinion resembling too much the extremes of militant feminism for my liking- never mind being arrogant, immature and nauseating.
Admittedly, she seemed to realize this attitude was unfair and unrealistic towards the end, but a little too jarringly modern for my liking.

Finally, the villain, when he was finally unmasked, seemed to be largely lacking in any real motivation- apart from being the person least expected, and the Christian themes did appear a little forced or contrived at times.
I would consider reading the next two books in the series, to find out the story about Lydia’s sisters, and recommend this, but, like the Midwives Trilogy and A Lady’s Honor by the same author, it’s not a favourite.