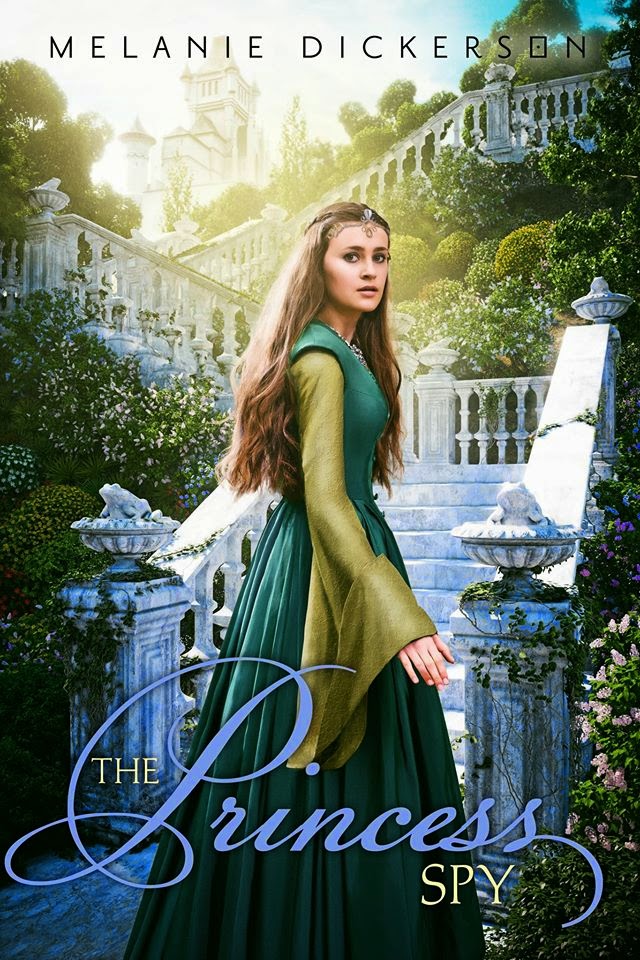 Margaretha has always been a romantic, and hopes her newest suitor, Lord Claybrook, is destined to be her one true love. But then an injured man is brought to Hagenheim Castle, claiming to be an English lord who was attacked by Claybrook and left for dead. And only Margaretha---one of the few who speaks his language---understands the wild story. Margaretha finds herself unable to pass Colin's message along to her father, the duke, and convinces herself 'Lord Colin' is just an addled stranger.

Then Colin retrieves an heirloom she lost in a well, and asks her to spy on Claybrook as repayment. Margaretha knows she could never be a spy---not only is she unable to keep anything secret, she's sure Colin is completely wrong about her potential betrothed. Though when Margaretha overhears Claybrook one day, she discovers her romantic notions may have been clouding her judgment about not only Colin but Claybrook as well. It is up to her to save her father and Hagenheim itself from Claybrook's wicked plot.

The latest of Melanie Dickerson’s ‘Hagenhiem’ stories, as I call them, draws together the two settings with the protagonist as the grandson of Ranulf and Annabel from The Merchant’s Daughter. In some ways, I liked this better than the previous books, particularly at the start with the storyline of the stranger who didn’t speak the language, and the mystery behind Claybrook and the young girl lacking in confidence with her social hangups about talking too much and her believed inability to keep a secret. Some readers may really relate to this.
Perhaps also, I took a certain pleasure in the hero being English (like me) and the novel not vilifying all English people as some tend to- despite one or two cultural stereotypes. I don’t think England is anymore rainy or foggy than Germany, for instance, as Colin says, the North Sea which separates the two countries is not an ‘ocean’.
Aside from this, the device of spying and the sinister plot against Hagenhiem worked well as a backdrop for the story and the actions of the characters.

It could perhaps be said that Marguerite was well-drawn than some of the other heroines, or Gisela in particular, for whom the praise as being strong and courageous did not always seem deserved. Marguerite seemed more able to think, plan, and act independently, and get out of difficult situations- or at least attempt to do so. Colin was as usual fantastically good looking, strong and virtuous- but there was a certain neediness about him (at least initially) which could be endearing and make him seem more realistic and less perfect.
His relationship and attraction to Marguerite seemed more genuine and less fluffy than before- although the fluffiness did remain, expressed with a certain preoccupation with kissing and physical beauty towards the end. One can understand how the circumstances could draw the characters together – but do they need to keep on dwelling on how beautiful one another were?

My historical gripes were few, and perhaps a little pedantic. Colin saying he was not trained for war when all noblemen’s sons would have been- the style of armour the characters wore seeming decidedly old-fashioned- by a century or more, and the idea that subjects of the King of England could go to a foreign country and commit criminal acts against the subjects of a ruler he was allied with without him even seeming to notice and assuming they could just get away with it. That and Marguerite wanting to have the chance to get to know her potential suitors as if this was something out of the ordinary- when it was actually the normal expectation for courting couples of high social circles at the time.
Also, perhaps one of the drawbacks to the story being centred on the same fairly small geographical region and family is that the some elements of the stories can seem repetitive, with lots of wanderings through forests and being chased by baddies in them that seem to have dominated the last three books.

Overall The Princess Spy was a good story with a sound Christian message about hope, forgiveness, and doing the best in difficult circumstances, and an interesting spin on the Frog Prince fairy tale. There seemed to be less Americanisms in the language of the characters than in previous stories, and I think Mrs Dickerson’s writing style is developing. It would certainly appeal to Young Adults and grownups with only a few reservations. I look forward to Melanie Dickerson’s next book, and the first in a new series The Huntress of Thornbeck Forest due out in May.

Grateful thanks to Booklookbloggers for providing me with a free ebook for review purposes. I was not required to write a positive review and all opinions expressed are my own.