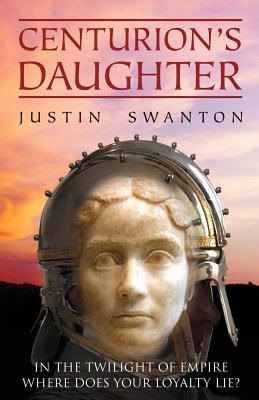 Her Frankish mother dead, 17-year-old Aemilia arrives at Soissons in Roman Gaul in search of her Roman father whom she has never met. She knows only that his name is Tarunculus and that he is a former centurion.
She finds an old man fixed on the past, attempting in vain to kindle a spark of patriotism in his dispirited countrymen. Soon, Aemilia is caught up in her father's schemes to save the Empire and the intrigues of the Roman nobility in Soissons.

In the war between Franks and Romans to decide the fate of the last imperial province, Providence will lead her down a path she could never have imagined. Written and illustrated by master storyteller Justin Swanton, Centurion's Daughter is a thoughtful and compelling journey to a little-known period of history when an empire fell and the foundations of Christendom were laid.

Interesting book covering the fall of the Western Roman Empire in the fifth century, or more specifically, the fall of Roman France (what was left of it) to the Franks, the people who gave their name to the country that was to be established in place of the ancient Roman province that have been called Gaul.
The story is told from the perspective of a girl who is caught between both worlds, the daughter of a Roman Centurion, and raised in the villa of a Roman Aristocrat, Æmilia is however, half Frankish, and her knowledge of the Frankish language makes her useful as a translator- but also causes her to be subject to suspicion and discontent.

In one sense, it is the story of a young Lady struggling to survive in a society that clings to the old ways that seem doomed to die out, but to nonetheless hold onto and protect all she holds dear; her father, her faith, her love of books and learning.
Yet she could only fight for so long, and eventually must learn to accept the new order. One part coming of age story, perhaps in another sense, but also a sold work of historical fiction in its own right, with plenty of realistic details, and is obviously well researched.

Had I not heard in a documentary recently that the Romans built apartment blocks, I might have thought the references to these an anachronism- but it is not so. There’s even a element of Romance, and the characters face realistic challenges and moral dilemmas. Is it better for Æmilia to protect and defend the culture she knows and lives, at all costs, or be prepared to embrace the rule of the Franks? Is it better to remain loyal to her potentially treacherous employer, and risk the consequences, or reveal all, which could also prove detrimental? How can she please a father determined to do all he can to fight in what may ultimately be a hopeless cause, and whose loyalty to Rome verges on fanaticism?

My only real historical complaints were some terms and phrases which seemed rather modern. Also, the prayers to Mary may be an issue to non-Catholic readers- though I tend to accept these as a reflection of the time, and some rather odd manifestations of her faith every now and again. However, for those seeking a solid historical novel, which is not the usual Romance and perhaps requires a little more attention, it may be a good choice. I would certainly read more by this author, who is working on another book. A King Arthur story might be good.....

I was given a copy of this book by the author for review. All opinions expressed are my own.