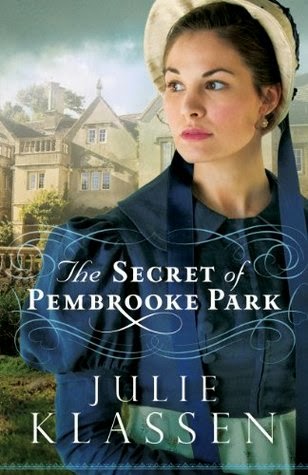 Abigail Foster fears she will end up a spinster, especially as she has little dowry to improve her charms and the one man she thought might marry her--a longtime friend--has fallen for her younger, prettier sister.

When financial problems force her family to sell their London home, a strange solicitor arrives with an astounding offer: the use of a distant manor house abandoned for eighteen years. The Fosters journey to imposing Pembrooke Park and are startled to find it entombed as it was abruptly left: tea cups encrusted with dry tea, moth-eaten clothes in wardrobes, a doll's house left mid-play . . .

The handsome local curate welcomes them, but though he and his family seem to know something about the manor's past, the only information they offer Abigail is a warning: Beware trespassers who may be drawn by rumors that Pembrooke contains a secret room filled with treasure.

Hoping to improve her family's financial situation, Abigail surreptitiously searches for the hidden room, but the arrival of anonymous letters addressed to her, with clues about the room and the past, bring discoveries even more startling. As secrets come to light, will Abigail find the treasure and love she seeks...or very real danger?

It’s been two years since my last Julie Klassen novel, and it seems The Secret of Pembrooke Park was her longest. Thankfully it was well worth the read, with regency adventure, romance, and a hint of Gothic horror with the mystery of the strange goings on at the house.  Hints of the classics, such as Northanger Abbey and other literary greats add to a generally satisfactory new novel.
I did feel that the mystery was drawn out for a little too long at times, and could have been ‘wrapped up’ more quickly. Also, the failure to follow up on leads, or pay attention to important clues could be somewhat frustrating. It must be said, however, that although I believed I had guessed the identity of some of the characters, these guesses proved largely incorrect- so the mystery was complex enough to be satisfying.

Mrs Klassen clearly does her homework, so her stories tend to be free of certain elements which I find irksome in some Regency stories: Such as the British characters’ speech being riddled with American terms and phrases, or the superfluous American hero, expressing the almost inevitable distaste at the lifestyle and social attitudes of the upper classes.

There seemed to be elements of a cautionary tale, with the theme of the destructive and tragic consequences of greed and the desire for wealth and power a central theme, and overall, it worked well in the story, even though some of the actions of the characters were a little extreme.
The Christian elements of the story as well as the moral struggles of the characters were plausible and true to life. Genuine without being ‘preachy’, but not so vague that it seemed watered down.
My only complaint-similar to that made by others, was that the behaviour of the character did not always seem consistent with what would have been acceptable during the time period- such as Abigail going out alone for a walk at night- and starting a cosy conversation with William in his underwear. Also, I did find some of the details were not entirely plausible. Surely someone would have asked questions on seeing a teenage boy bleeding to death from a gunshot wound?

Altogether, The Secret of Pembrooke Park is a quality Regency Romance, and a recommended read for those who don’t mind something over 450 pages (in the paperback edition.)
I received an ebook version of this title free from the publisher via Netgalley in exchange for review. I was not required to write a positive one and all opinions expressed are my own.