The Knight and the Dove- Lori Wick 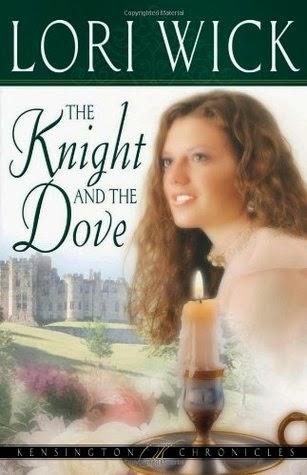 "Eager to secure a permanent loyalty from this promising young knight, King Henry commands Bracken to marry into one of the crown's most loyal families. But Lord Vincent's oldest daughter, the beautiful yet deceitful Marigold, scorns the king's edict. She will never marry a lowly earl. Now Vincent must call his beloved Megan from the abbey and send her to Hawkings Crest to wed.

When Marigold discovers that Bracken has been made a duke for his obedience, jealousy drives her to madness - a madness that will stop at nothing to bring her youngest sister pain. Will Bracken rescue Megan from Marigold's wicked scheme? Will Megan ever hear the words she longs to hear from her knight?A moving epic of God's tender care in even the darkest moments."


This book had been sitting on my shelf for a long time- so I thought it was high time to read it. I had seen mixed reviews, and my own were also rather mixed. In many ways, it was a sweet Romance which explored the deeper issues within relationships, such as learning to give and take and a good Christian Story which was not afraid to lay out the gospel and the necessity of repentance and surrender to God.
Perhaps since 1995, when this was first written, there have been a lot of other stories in this vein, and so it seems similar to a lot of other stories in this genre. Clean, edifying and certainly commendable- but, and here's my major complaint- I think there's a problem with books written in a particular setting by people who are not familiar with it.

The basic details seemed correct (except the tea drinking!), but on the downside there seemed to be sometimes rather inconsistent mixture of modern and archaic language, and what seemed to be something of a misunderstanding and misrepresentation of Medieval Religion.
Now I know Inspirational Fiction can be evangelistic, and that most Protestants accept that there are fundamental theological errors in Catholicism- but seriously- Catholics believe in the Crucifixion and Resurrection, and they did in the 16th century. So for characters so say that their unsaved fellows believed only in God but not in Jesus just seemed a little silly, and some of the attitudes contrived.
The other major historical issue was to be found in the last chapter. Elsewhere there were few details of the major political events of the Tudor Age, but in the Epilogue Henry VIII's marriages were mentioned- yet in a way that seemed woefully inaccurate. It was said of Katherine Howard 'Henry had found her guilty of misconduct' and executed.
Seriously-So the King could just have people convicted on his word alone- on a whim? I don't think so--- and Katherine Howard was convicted of Adultery- tantamount to treason for a queen- not simple misconduct. Talk about historical misunderstanding....

Finally- there were the names- some of which seemed more appropriate for a fantasy story. Bracken has to be the most implausible name ever for a sixteenth century English noblemen- but others were little better- a neighbouring Earl with an ancient Viking name- and a soldier called `Stafford'. Stafford is the name of the a city in the English Midlands-it's a place name- using it as a personal name is like calling a person Manchester, London or Oxford.

Overall, I am glad finally read The Knight and the Dove but I'm don't think if I liked it enough to read it more than once. I tend to prefer my Medieval fiction more accurate, realistic, or culturally aware, and perhaps less whimsical.
One for giving away or leaving on the train, I think...