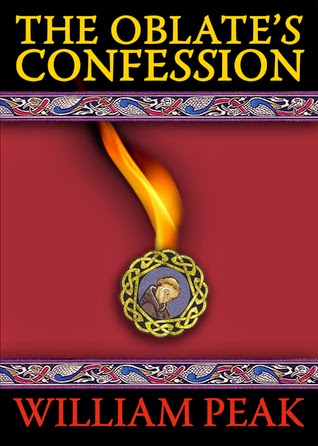 "The Dark Ages, England: a warrior gives his son to a monastery that rides the border between two rival Anglo-Saxon kingdoms. Growing up in a land wracked by war and plague, the child learns of the oath that binds him to the church and forces a cruel choice upon him. To love one father, he must betray another. The decision he makes shatters his world and haunts him forever.

This quietly exotic novel places us compellingly in another time, another place, where chieftains fear holy men, holy men fear the world, and prayer has the primal force of fire. While entirely a work of fiction, the novel's background is historically accurate.

In the midst of a tale that touches the human in all of us, readers will find themselves treated to a history of the Dark Ages unlike anything available today outside of textbooks and original source material."

Alright, I admit I am slightly obsessed with the early Anglo-Saxon period, and any book in the Christian Fiction genre set in seventh century England is likely stir up a childish excitement and delight upon discovery.
On seeing this book mentioned amongst others in an article that demonstrated how the medieval period is becoming an increasingly popular setting in said genre, I decided it was time to read.

I expected- well I’m not sure- maybe not a sweeping epic- I did read the synopsis after all. There were many positives- the realistic account of life in the early period of monasticism, the struggles of Bishops and senior clerics trying to play the political game. Beautiful and evocative descriptions of the landscape and watching the young Winwead grow to manhood. Readers may appreciate the descriptions of the monastic lifestyle from the perspective of a bright boy who was given no choice over his vocation, and sometimes struggles with its strictures, and the impact wrought upon the only home he knows by the actions of others.

However, for a book that derives its title from the sinful act that the protagonist is supposed to have committed, it just seemed to take a long time to get around to mentioning and exploring it, and seemed to drag in places, with whole chapters devoted to relatively minor incidents, or occurrences that seemed to have little significance and lead nowhere. Thus the impression is given of the story jumping around rather a lot – I’m not sure whether maybe this was meant to be symptomatic of the child’s perspective of the world- quickly losing interest, and following curiosity. Also, though generally well-researched there seemed to be a few lapses into overly modern speech, and I’m not sure all the details were entirely accurate.

The other issue was some of the religious content. Now I appreciate that the man who became Winwead’s mentor Gwynedd (pronounced Gwyn-eth) was an ascetic and something of a mystic- but I’m pretty sure Jesus never told his followers to empty their minds when they pray, and the book seemed to be drawing rather too much on the works of much later contemplatives.
For the conservative Protestant reader, some of the religious ideas put across would seem to verge on heterodoxy- and the scene in which Gwynedd starts levitating was just plain- freaky- the almost matter of fact way in which it is reported adding to the general oddness.

For those of the above religious tradition, this novel may not appeal. For this who like stories set in monasteries, or a decent coming of age tale I would recommend. I just seem to prefer my Anglo-Saxon fiction to be focused on the movers and shakers of history and the wider world, but although sometimes plodding, I would say The Oblate’s Confession is worth reading once.

I received an electronic version of this book free from Netgalley for review. I was not required to write a positive one and all opinions expressed are my own.