Brave knights and a murdered Bishop- Two reviews in one go! 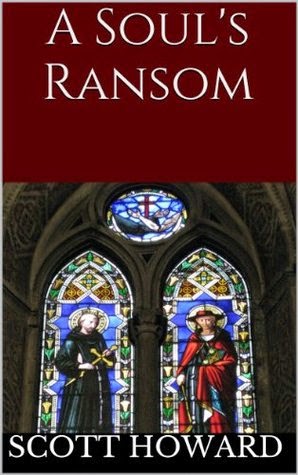 On August 26, 1346, a great battle was fought at Crecy between the outnumbered English forces and a superior French army. Sir William de Courtenay, an English knight, was primed to test his pluck, but capture would forever change the course of his life.
His mud-encrusted grin at a peasant girl and his kind words of intervention to a noblewoman would alter their lives, lives that would soon be intertwined into a drama more grand than they could ever imagine. For some, their escape would lead to the fulfillment of long-held dreams, but for another, dark despair.

Opposition will rear its head and attempt to destroy. Roles will become reversed and the skies of hope will roll back, only to be replaced with clouds of gloom. A hard choice of faith will have to be made by his friends and betrothed- believing that a dead man is indeed alive. If he is alive, then honor dictates that he should clear his name and regain the title that has been stolen. What secret would drive him to hide from someone who loves him as her own soul and would crawl from the ends of the earth to hold him in her arms? Is his pride so powerful that he would disavow all that he had once embraced?
A touching epic of faith, hope, and love, where mettle is tested, weighed, and refined. A story where sacrifice sows an enduring yield.
What price can be put on a soul?


A worthy read as a historical adventure story set in the Medieval period, but I had a few issues, First of all, it was not especially accurate- now I appreciate that the author says in the note that it is not supposed to be and he had taken some liberties with the facts, but these were not the main problems.

Principally, what seemed to be a blind adherence to popular misconceptions about the time period. That lords could have peasants - or even royal messengers- summarily killed for almost anything, and the element of modern judgement. Seriously, why do the 'Christian convictions' of characters just happen to reflect modern ideals and expectations- pacifism, egalitarianism etc? Just because modern Americans or westerners don't approve of something or understand the reasons for it, why does it automatically have to be written off as bad or stupid?

Then there were some glaring errors, that I could really not overlook.
Medieval people did not, repeat not, use the word 'Okay'. It ranks alongside having them eating Turkey, potatoes and sipping on Earl Grey tea on my list of simple errors that historical fiction writers should not make. Also, the seemingly odd geographical conflation of the region in which Edward III's Queen was born. She was said to be 'French even though she was born in Flanders'.
From what I looked up the Medieval region of Hainault covered parts of modern day Belgium, so what would make her Belgian surely? Yes, the language and culture was French, but it is a separate country- like confusing an American with a Canadian today, right?

...and some incidents just didn't seem to make any sense, at all - were they just put in to emphasise how horrible Edward III and most English soldiers supposedly were? I mean throwing prisoners overboard because you would be in more trouble for jettisoning the booty? Seriously- and the point in burning the ancestral lands you are trying to reclaim? I've heard of the destructive Chevaucee raids, but this makes it sound like they were official policy. Sometimes, it just read like a bad Hollywood 'historical' movie. Another 'Timeline' or 'Joan of Arc' (...euurghhh)- though it was not wholly Anglophobic, as the depictions of many of the characters on both sides was fair . 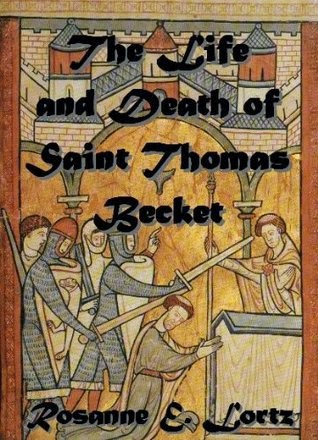 This title is a college thesis written by Rosanne E. Lortz to fulfill her graduation requirements at New St. Andrews College. It tells the life story of Thomas Becket using typology (a device employed by medieval chroniclers, where a person is used as a metaphor for another person, usually a Biblical character).

Archbishop Thomas Becket was a central figure in the church-state conflicts of the twelfth century. Beginning his career as royal chancellor to King Henry II, Becket helped Henry persecute the Church’s liberty, just as the Apostle Paul had done. When Henry selected Becket to be the next archbishop of Canterbury, this promotion became his Road to Damascus conversion.

Becket championed the cause of the Church he had formerly persecuted, declaring that kings had no power to meddle with ecclesiastical affairs. Although he faltered once at the Council of Clarendon, Becket later repented of this failure. Exiled from England, he spent the next seven years in France. Finally, in 1170, Henry agreed to rescind his unlawful demands and to receive Becket back into England. Upon his return, a group of four barons murdered Becket in his church at Canterbury. Like our Lord Christ, however, Becket accomplished his work in his death, and Henry was forced to grant many of the freedoms that Becket had demanded for the Church.

Rosanne Lortz' first book is in danger of bolstering my admiration of Becket. I got interested as I have John Guy's new Biography, and managed to get it as a loan.
Well worth the read as an introduction to Becket's life and career, and for a slightly different view of the enigmatic Archbishop removed from entirely secularized or politicised appraisals.

The use of Medieval typology was clever and well done for the most part- even if the chronicler deliberately sought to portray Thomas in a certain way, it can help the reader appreciate the motives of the fun-loving Chancellor who became a pious prelate, and defied a King to defend the independence of the church from state interference.
It is a legacy that still resonates today, when governments may seek to force the church to implement controversial legislation to perform actions contrary to canon law and biblical teachings