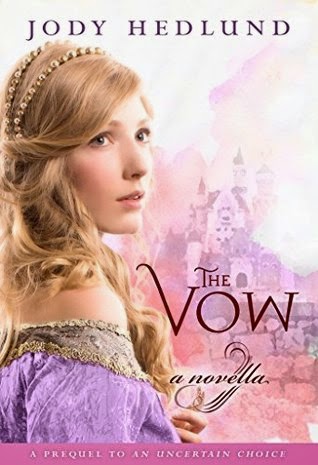 In this ebook historical romance novella by Jody Hedlund, young Rosemarie finds herself drawn to Thomas, the son of the nearby baron. But just as her feelings begin to grow, a man carrying the Plague interrupts their hunting party. While in forced isolation, Rosemarie begins to contemplate her future—could it include Thomas? Could he be the perfect man to one day rule beside her and oversee her parents’ lands?

Then Rosemarie is summoned back to her castle in haste. The disease has spread, and her family is threatened. And the secret she discovers when she returns could change her future forever.

This novella also serves as a prequel to Jody Hedlund’s An Uncertain Choice.

The Vow- a short prequel to the YA novel An Uncertain Choice serves to whet the appetite for the main course- introducing the major characters, and the background of the plot- and promising a hint of romance.
I would call it a sweet story- but the sad ending rather renders that meaningless- its tightly plotted and for the most part well written considering the use of the first person narrative.

Both are new territory for me, as I had hitherto read nothing by popular author Jody Hedlund.
The Medieval setting was generally well done- high praise indeed from a Medievalist such as myself, as I think it can be difficult for authors who are not familiar with the setting, or have never visited Europe to be faithful to this period. Although the country is fictitious, there were, shall we say, distinct shades of Englishness, with some of the names and titles.

My only complaints were historical, and some may be seen as a little finicky, but bear with me. The first was pockets- or more especially the make lead having a pocket large enough to hold a girl’s bracelet- in his leather Jerkin, no less. Not only were pockets not used in the Medieval Period, but if there’s one garment to which pockets would seem wholly unsuited, it would be that. I also noticed what seemed to be a couple of Hollywood like tropes- knights wearing armour almost all the time, including at a funeral service, for instance (why?), or a messenger mounted on a warhorse- an animal generally unfit for everyday riding.

My biggest gripe, however, was the mention of torture. I’m not saying such things never happened, and I’m not about to whinge about it being unsuitable for YA readers- but I felt it the inclusion of the scene in which Rosemarie sees two torture victims was unnecessary and unrealistic. Unnecessary because it seems to be included only for her to be repulsed by it, so show what a good, sweet, compassionate little girl she is, and how horrid the Middle Ages were.
Unrealistic because, contrary to the image presented in many movies (and some ‘torture museums’ that are largely modern invention….) torture was nothing like as prevalent or common in medieval society as we are led to think. Especially not in England, where it was actually against English common law, and only just considered acceptable for the very worst crimes such as treason or heresy- and even then, in all my years of studying the period I have never come across the method mentioned in this story.

So the idea of an evil sheriff summarily subjecting people to the most horrible or tortures for trivial offenses just seems wholly implausible- more like something a cartoon villain would do, than a reflection of historical fact. Also, I have to admit, Rosemarie’s attitudes were sometimes annoyingly modern and self-righteous- like condemning the sheriff for killing people infected with the plague. Seriously- He was trying to contain one of the deadliest diseases known to man- he couldn’t just let people escape from quarantined areas to spread it abroad- and Rosemarie whining about how they were just trying to find food just came across as unbelievably naïve in the circumstances. Compassion and humanity is one thing- rank stupidity another.

In spite of the paragraphs chronicling the negatives, I did enjoy this Novella, and I look forward to getting into the full length follow up as soon as possible. A worthwhile read, with a few reservations, that could perhaps benefit from a little more research.