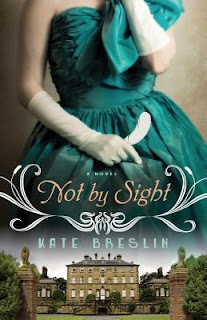 With Britain caught up in WWI, Jack Benningham, heir to the Earl of Stonebrooke, has declared himself a conscientious objector. Instead, he secretly works for the Crown by tracking down German spies on British soil, his wild reputation and society status serving as a foolproof cover.

Blinded by patriotism and concern for her brother on the front lines, wealthy suffragette Grace Mabry will do whatever it takes to assist her country's cause. When she sneaks into a posh London masquerade ball to hand out white feathers of cowardice, she never imagines the chain of events she'll set off when she hands a feather to Jack.

And neither of them could anticipate the extent of the danger and betrayal that follows them--or the faith they'll need to maintain hope.


I'm stepping rather outside my comfort zone with my Netgalley requests for this year. Not by sight is a Romance set during the First World War- no doubt inspired by the massively popular Downton Abbey series, and the first book of this Genre I have ventured to read set in this period.
The sub-plot of espionage interested me, I think it bought to mind 'The Thirty-Nine Steps', although I did not belive the classic would be matched,
There were perhaps shades of the more recent BBC Adaptation with the elements of Romance, and some unexpected characters being pulled in- but the Drama was more of a Domestic, cosy kind, based on the relationships and interactions between the leading characters.
It would also be possible to see some shades of series such as 'The Land Girls', given the Emphasis on the lives, loves, and struggles of Grace, and her fellows in the Women's Forage Corps that 'flesh out' the book.

It must be said, it’s not the best spy novel in the world. The culprit was a bit predictable, and both sides seemed a little sloppy, clumsy, and slow in their methods. Yet, I got the impression that this was not supposed to be the main thrust of the story.
Some have complained about the lack of action in the main section of the novel, and its focus (perhaps over-emphasis) on the girls and their farming activities. This did not bother me per se, as that was what they were there to do, and it allowed for the development of some interesting backstories for the minor characters, even if some of these were a little on the melodramatic side.
Admittedly, the story it did drag a little in places, though I enjoyed some of the descriptive passages that others may have had little time for. Then again, it might not have been entirely necessary for the characters to explain the way that being confronted with reality had changed them, when this was made obvious elsewhere.

As to the protagonists, I took to Jack reasonably well, and his reactions and attitudes seemed reasonably realistic (except perhaps falling head over heels for a women who may have been working for the enemy). Grace, whilst, likable and caring at times, could be a bit of a goody- two-shoes, and rather self-righteous in places, convinced that her political ideology was the only solution to almost all of the problems in her society.
Maybe it’s just that I don't get on with people who like to get on their soapbox, and preach about the evils of anything that does not fit into their preconceived belief system to the point that their outlook becomes rather unrealistic. For instance, Grace complains about women 'bearing the brunt' of arranged marriages, but does not seem to consider than men were subject to them just as often- and of apparently will not even entertain the idea that such arrangements could even possibly be happy.

The romance itself was something of a mixed bag. Sometimes the characters behaved sensibly and courteously like mature adults, and the idea of getting past appearances to find out what a person was really like was done well. As things got further on, there seemed to be more emphasis on kissing, touching, and 'longing' for one another, with sudden changes in emotion or outlook.

The historical details were interesting, and the faith elements worked well-even if they were a little clichéd. My main complaint was the whole story being absolutely riddled with Americanisms in the character's speech, and even some of their manners.
I'm sure there were a couple of scenes in which the characters were eating with only a fork, as Americans are accustomed to, rather than a knife and fork, as is more usual in Britain, and would have been amongst the upper classes at this time. I suppose it’s to be expected, but this still irks me. I almost think, if an author chooses to set a novel is a culture and country other than their own, they should research the speech patterns, and customs of that culture, and try to accurately represent them to some degree.
The geographical descriptions of the region in which the story was set were correct as far as I could tell, and real effort seems to have been put in to making sure this was the case, so why not for other aspects as well?

I would consider reading more by this author, and perhaps this one again, but I feel there was some scope for improvement.

I received an E-book version from the Publisher via Netgalley for review. I was not required to write a positive one and all opinions expressed are my own.