The Isle of Arcrea- Nicole Sager 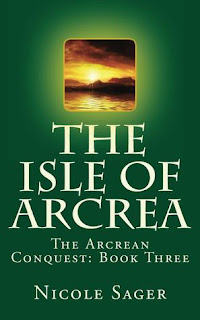 Subject to the designing rule of evil men, one island's future rests in the hands of an Arcrean.

Lady Meredith of Gilbrenor seeks help from the borders of Arcrea in a desperate attempt to rescue her son from the clutches of Lord Brock and to claim his rightful legacy. When Falconer undertakes the seemingly simple mission and travels to the isle with Meredith and her two young daughters, he is unprepared for the painful memories from his own past that wait to confront him on the distant shores.

Seth is a simple Arcrean shepherd whose worries are few and far between. When the discovery of a costly heirloom starts him on a quest of justice, it quickly becomes a journey that will test the strength of his faith and unlock the truth of his life?s purpose.

A lost parchment, a devastating secret, and an evil lord who seeks their ruin. Will the puzzle of Gilbrenor be solved and her future secured before it is too late?


Another enjoyable read with a sound Christian theme, in which it was interesting to see a formerly minor character come into his own. In this case, it was Falconer the former spy and ‘informant’, whose background and circumstances we learn more about. His getting a chance at love was quite sweet and touching.

Some of the circumstances were rather predictable- I was able to guess Seth’s true identity a chapter or two before it was revealed, for instance. Also, some of the fight scenes left a lot to be desired (one guy beating up three or four trained soldiers- really?), and the characterization of the villain- well, it gets a bit repetitive after a while. Yet another evil Mizgalian nobleman. Finally- potatoes in the Middle Ages- even in a fictional Medieval society of that includes dragons and other made-up creatures, are a real annoyance to me. Ditch the spuds guys- they come from America- not Europe!

I would recommend this series for families and Young Adults, who are the intended audience (and I understand the reason why they can appear rather simplistic), and those seeking a wholesome, clean, magic-free alternative to secular fantasy stories. Those who prefer their fantasy a little more complex, nuanced or realistic might like other stories better- but this series is still worth a look.

Thanks again to the person who loaned this book to me, allowing me to read the whole trilogy for free.
I would consider the author's second series, as I would be interested in seeing the stories of characters like Eliena concluded, but I'm not sure I would be prepared to pay nearly £5 apiece for the books.