I know, another post on a subject done before might be enough to induce an eye-roll, but I think that my reading habits have shown that this subject is misunderstood, and to a certain extent, misrepresented so much that another word is needed to clear things up.

The continuing problem is that so many Medieval Fiction stories still feature forced marriage, or inevitably unhappy arranged marriages that the ancient Canon Law prohibition on the former seems null and void. In fiction do we get the idea that this sort of thing was somehow normal, because of the common fiction trope of the pretty young girl married to a horrible, ugly or abusive man....you get the picture.

Christian Fiction books are treading in very risky territory by portraying any kind of adultery or sexual immorality- as a novel I recently encountered did in a similar scenario, and I am almost inclined to think that is a good thing. There are standards, which I think should be upheld.

Yet conversely, many if not most Romance type stories of this genre set in the Medieval period will feature a girl or young woman who is either threatened with or subject to some kind of forced marriage.
The age old trope over again. Now don't get me wrong, I understand the need for drama and conflict in stories, but it seems to me that time and time again authors are ignoring a fundamental aspect of Medieval law and custom- namely that the church banned forced marriage very early on- from the late twelfth century in fact.
Very often though, in fiction, the ban is either not mentioned at all, or is simply brushed aside, as something that made to real difference, and it is made out that forced marriage was pretty much the norm anyway (at least for the noble classes). The cynic in me is inclined to think that the reason for this is that authors simply want to write about forced marriage- because its seen as more interesting or dramatic, and don't want to let an inconvenient fact get in the way of the story.

Sometimes, though, I encounter specific reasons why the ban is not addressed or is not considered relevant.
It might be said families or guardians could put pressure on children, regardless of what the law said, to accept a marriage that they did not want, or that they dared not defy a royal edict (a common scenario). Otherwise, it might be made out that clerics and priests could easily be harassed or even bribed to turn a blind eye to a less than legal marriage ceremony.
I for one am inclined to think that the level of 'corruption' in the Medieval church, and the English church through the ages has been grossly over-stated, by some of the early supporters of the Reformation- and, perhaps controversially, by Modern Americans making sweeping generalisations about British history and culture- but that is a different matter.

Whist it is not implausible that families could put pressure on their members- the historian in me rails against the idea that it was so easy to just ignore or get past the ban on forced marriage, as we often see in fiction. 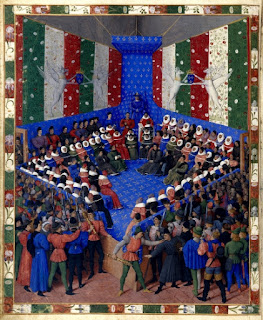 One reason was the nature of the law itself. Canon Law did not directly say 'Forced marriage is forbidden'. Rather, it stated that both parties had to give their free and willing verbal consent in front of witnesses for any marriage to be considered legally valid. (Which is probably why we still have the 'I do's' today).
Now, you might be thinking, it would be easy for the superlative tyrannical and abusive father to simply make his daughter give her verbal assent- but, forced consent is not free or willing....and, here is the key point.
Lack of free consent was one of only a few basis on which a person could secure a divorce in the Middle Ages.
That is right. If little Mary's father ordered her to give her consent in the part of the wedding service which asked her for this, she could, later on take the matter to the church courts that were common in the Medieval period, and dealt with most matters relating to marriage and morality. If she could prove that she had not given this consent freely, then she could, at least in theory, get the marriage annulled because it was not legally valid.

Perhaps the idea of a repressed Medieval woman going to court  to fight for her rights seems implausible,  (I can almost hear shouts of '.....but Medieval women had no rights!') but its actually not so far-fetched at all.
In England, the Medieval court system produced extensive records- sometimes literally almost everything pertaining to proceedings and cases was written down- (expect sometimes the final verdict), in Latin of course. This is wonderful for historians, as so many records have survived, and then can give us some intriguing insights into Medieval law, and how it related to people at all ends of the social scale.

One thing the records show is that women went to court on a regular basis- and often as the Plaintiff rather than defendant. Yes indeed, Medieval ladies were inclined to sue if the need arose. When it came to cases related to marriage in church courts women frequently crop up- but they also appear in cases related to the secular courts as well. 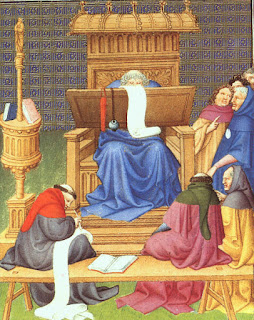 Here is the interesting thing- there were many cases of guardians taking their wards, or former
wards,  to court over 'unauthorized' marriages- namely marriages to persons not of the guardians choosing entered into without their permission and consent.
In other words, it would seem that young people of the nobility and gentry were frequently ignoring the wishes of their guardians where marriage was concerned, and freely choosing their own spouse.

Hardly the picture that we have of forceful elders bullying and cajoling the younger generation to marry someone that did not want. In fact, the legal records also reveal something else- the number of cases pertaining to marriage and property ownership suggests that Medieval men and women were fully aware of their legal rights, and were more than willing to go through the courts to secure and defend them.
There are even cases of wives complaining to the courts about mistreatment at the hands of their husbands. In other words, abuse of women was not something that was necessarily legally accepted or condoned in the Medieval period. In extreme cases, abuse could be grounds for separation.

I think, as time goes on, the above is one thing that I am learning to love about what I do. The past is not something that is dead, dull and boring (though the records can be tedious). It has left behind traces and sources which can give us vital evidence about the lives of past people, as well as their culture and society.
Very often, what is revealed by the evidence can defy or expectations and preconceived ideas about what life was like in that past, their actions, attitudes and beliefs.
In this case, the evidence seems to reveal that Medieval women were assertive, knew their rights, and had the support of the law- and I for one rather like that idea more than seeing them as repressed and passive pawns in the hands of other people.