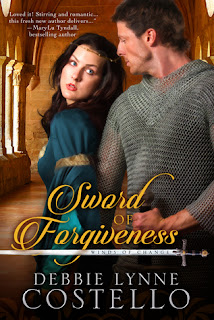 When her father died, she had promised herself no man would own her again, yet who could defy an edict of the king?

After the death of her cruel father, Brithwin is determined never again to live under the harsh rule of any man. Independent and resourceful, she longs to be left alone to manage her father's estate. But she soon discovers a woman has few choices when the king decrees she is to marry Royce, the Lord of Rosencraig. As if the unwelcome marriage isn't enough, her new husband accuses her of murdering his family, and she is faced with a challenge of either proving her innocence or facing possible execution.

Royce of Hawkwood returns home after setting down a rebellion to find his family brutally murdered. When all fingers point to his betrothed and attempts are made on his life, Royce must wade through murky waters to uncover the truth. Yet Brithwin's wise and kind nature begin to break down the walls of his heart, and he soon finds himself in a race to discover who is behind the evil plot before Brithwin is the next victim.

I honestly did not know what to expect from this book before I read it (I actually thought it was set in the 1100s from the style of the armour shown on the cover when I first heard of it). For a first full length novel, it is certainly a good effort, with plenty going for in in terms of storyline, Romance and suspense.

What I could say, however, it that sometimes the Historical Romance genre hampers the progress of stories like this....and for the genre, there was not a lot in this novel that was not untypical. I'm going to say right now that the trope of 'forced marriage' in medieval stories really annoys me, and can be a big turnoff. It’s totally inaccurate (forced marriage was in fact illegal) and it’s an awful cliché.
I really thought that the marriage in this one was not supposed to be 'forced'- but it was described as if it was, and Brithwin's belief that she could be executed for refusing to marry the person the King wanted was just absurd.
Seriously- that's another pet hate of mine- characters who are supposed to live in a certain society or time period- but are totally unfamiliar with the laws, norms or customs of that society. Medieval English noblewomen could not be killed for refusing an arranged marriage- even one that the King wanted. In fact, the evidence shows they did things like that on quite a regular basis.

On the plus side, the characterization was pretty strong for the most part, and the element of conflict and intrigue was well done. There was enough, I think to keep the audience guessing and the story moving on, and enough human drama to make for well-rounded, imperfect characters and a strong central theme. Who doesn't love a story the age old story about a tough guy trying to win over his Lady?
The geographical location (the Northern English county of Cumberland, just shy of the Scottish border), also made an interesting background for some of the events, with the tendency towards instability, lawlessness and raiding that was common in the late Medieval period.
That said, the characters did seem to do some very stupid things at times (which was usually necessary to bring them into some kind of situation of danger or conflict), which on, reflection, they really ought to have learned not to do. Why did they keep on leaving the castle without an escort knowing there were enemies in the area, or someone trying to kill them?

Other reviewers have said this story is 'anti-Catholic'. I don't think it is that necessarily- but I will say there was some inaccurate details about the Lollard movement and its founder John Wycliffe. For instance, the Lollard priest claims that many of his fellows had been killed for their beliefs- but historical records make it clear that no Lollards were killed until after 1401, when the law was changed. There was persecution of the members of the movement, yes, but no actual executions- and certainly not by secular rulers.
Also, the historical note describes John Wycliffe as a 'lay preacher', when he was in fact an ordained Priest and a Canon- perhaps these errors were due to some deficiency in the sources that were used for research (there are certainly a lot of incorrect ideas around about Medieval religious movements), but its unfortunate.

Overall, this was a worthwhile story. I would say that I would almost certainly have purchased it for myself if I had not won a free Kindle copy in a competition, and I will certainly keep it to read again. I just think it could have been better- maybe more use could have been made of the political situation of the period, and some situations felt a little clichéd or improbable.