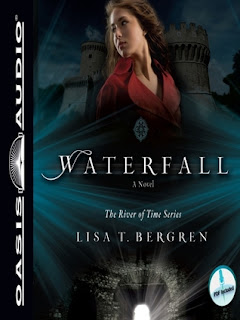 What do you do when your knight in shining armor lives, literally, in a different world? Most American teenagers want a vacation in Italy, but the Betarrini sisters have spent every summer of their lives among the romantic hills with their archaeologist parents.

Stuck among the rubble of medieval castles in rural Tuscany on yet another hot, dusty archaeological site, Gabi and Lia are bored out of their minds … until Gabi places her hand atop a handprint in an ancient tomb and finds herself in fourteenth-century Italy.

And worse yet, in the middle of a fierce battle between knights of two opposing forces. Suddenly Gabi’s summer in Italy is much, much more interesting.

I finally purchased the Kindle, and then the audible editions of the first three titles in the very popular River of Time series. Some might call the series pioneering, having made books set in the medieval period more popular and ‘respectable’ in the Christian Fiction Genre.

I don’t think it was a bad book- but- I have read- or listened to- much better. Perhaps it had something to do with the target market, and the book being written from the viewpoint of a teenage girl- but it often came across as rather silly and shallow. Certainly, Gabi’s speech and thoughts were true for her background, but, as other reviewers have commented, the romantic content, and out heroine’s approach to it, could be said to have lowered the tone. Don’t get me wrong, I have no problem with romance, but not mushy and gushy romance that overcomes the story. Or silly, inconsistent behaviour and attitudes by the characters- although I guess that can be expected for teens.

A lot of the details also just struck me as being very unrealistic. Take the first scene in which Gabi falls head over heels for Marcello when she claps eyes on him during a skirmish, and starts admiring his face and physique. An unusual reaction when finding oneself just having been transported through time into the Middle of a Battle- certainly- but where was his armour?
Seriously, the average gear of a Lord’s son in the first half of the fourteenth century would have consisted of some pieces of plate armour, with some kind of padded tunic underneath, for extra protection. With all that on, you wouldn’t really have been able to see a person’s physique- and to describe as much of his face, including his cheekbones, out hero must not have been wearing a helmet at all- never a good idea in a Medieval battle. I mean seriously, was be lounging about in his undergarments or something?

Perhaps another problem was that the story tried to do too much and be too much. To tick all the boxes for ‘what a teenage girl would like’- beautiful boys, beautiful clothes, strong and tough heroine, action and adventure. Oh, there was action aplenty- but some of the fight scenes were like something out of a cheesy movie. I’m sure it’s really not that easy to slice through armour- and as another reviewer pointed, out- a fencing rapier like Gabi was trained to use, is quite different from a medieval broadsword. Yet our heroine seemed to master its use in about 5 minutes, and by two thirds of the way through, is in the Middle of a pitched battle against people who have been training for years. Again, I have no problem with strong heroines- but I like them to be strong in a plausible way- not just because warrior women are fashionable.

Admittedly, she did learn not be quite so judgemental on some occasions (not having all the facts or knowing all the circumstances) but at times her views or the details represented popular myths about the period more than anything else. Medical ignorance and rotten teeth amongst them. Actually, it’s been demonstrated that more people suffered from tooth decay in the 20th century than the 14th, as a result of having too much processed sugar in their diet. That said, it did at least depict the people of the time as being concerned with bathing and hygiene.

One just didn’t feel ‘transported’ back to the time, as I like good historical fiction to make me feel. It all came across as a little bit superficial and shallow, especially when the historical backdrop and context seemed to fall by the wayside, and the story focused more on Gabi and Marcello (who despite his good looks, was not the most well drawn character- more like the stock sexy tough guy) kissing or wanting to kiss, or agonizing about being unavailable.

I understand that Young Adult fiction has certain limitations, and maybe looking at it from the perspective of an adult was the wrong thing to do- but this could have been so much better. . I am probably going to take it through to the end of the series, to see how the series pans out, and if the characters and story might develop more.

Readers way wish to note that due to certain content issues, this book is probably not suitable for pre-teens. This involves a character pinning down Gabi and intending to rape her, and another character taking her into a corner to talk to her, and making lewd remarks as well as inappropriate touching.
I don't really approve of such content being justified as 'realism' when its really just put in for dramatic effect, but readers may wish to exersize thier own discretion here.