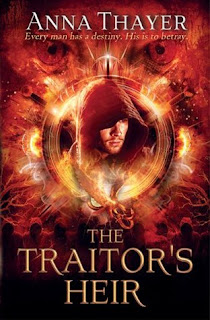 For over five hundred years the River Realm has lain in the charge of the Master, and the Master’s glory has kept the land strong against its enemies. As Cadet Eamon Goodman swears to serve the Master – his highest ambition – a dark voice penetrates his mind, and offers him unsettling power.

Then Eamon meets the true King. Despite having made a binding oath to the Master, his heart longs to be a King’s man. Whom will Eamon betray?

The Traitor’s Heir is the first volume in the epic fantasy trilogy, The Knight of Eldaran. Anna Thayer masterfully weaves a world of intrigue, passion and divided loyalties, which will grip the reader from the first page to the last.

I think I have something of a love/hate relationship with Epic Fantasy. On the one hand, I'm a huge Lewis fan- and a lover of the Tolkien movies- but I'm also a Medieval enthusiast who has never read the Lord of the Rings, and its accomanying volumes. Some might call that disgraceful.

For a while I didn't really like fantasy except Lewis, unless it was Historical Fantasy (like historical fiction but not set in a real time or place), or human centred fantasy. I still don't always go in for dragons, goblins, and the such. I wasn't even intersted in this when I first saw, it, but then I saw recommendations from a friendly acquaintance, and that the author is an expert on Tolkien and Lewis, I decided to try it.

As another review has stated- The Traitor's Heir is human-centred fantasy. There are no mythical creatures. It is centred around a fairly ordinary chap- Eamon Goodman, an orphaned young man whose only dream since chidhood was to become an officer in the Gauntlet- and elite military Unit supposed to protect the River Realm and serve its ruler known as The Master.
Eamon is just that- very ordinary, and very human. In the first chapter he makes a mistake and botches a military assignment which jeapordizes his future. The next thing we see, he is in his garden, weeping, despondent at his failure. He's no fantasy superhero, and that is something I found rather endearing and relatable.

To cut a long story short, Eamon's wish is fulfilled with help from some of his oldest friends, and finally he takes his oath on his inauguration to the Gauntlet. From then on events take a darker turn when Eamon starts having troubling dreams, and unsettling things begin to happen. A strange power seems to exude from the mark of Master, which all the Gauntlet bear on their hands, a power which at times takes control of him, and drives him do things he does not wish. He also began to he hears a dark voice- the voice of the master- goading and cajoling him, constantly reminding him of his allegiance.

Then Eamon is devastated when his friend and neighbour and his daughter, Aeryn, are arrested, accused of being 'snakes'- enemies of the Master and of the realm- and worse, claiming loyalty to the King- the King who was deposed and killed 500 years before.
To prove himself, Eamon is chosen to join a troop of men to take Aeryn as a prisoner to a far distant part of the realm. Eamon thinks he has found his place, and is starting to earn the respect and love of his men, when his ship is attacked, and many of his comrades slaughtered. Saved only by the intercession of Aeyrn, Eamon is bought before Hughan, a man he knew from childhood and long though to be dead- a man who is called the King, and claims to be the last of the line once deposed.

The King has a startling revelation which explains Eamon's dreams, and offers him and choice- to swear to serve him as his true Master, to undo the wrongs of the pas. Eamon swears willingly, though both know he must return the capital, and serve the King in the midst of the enemies' territory.
From then on, Eamon struggles with his two oaths, his true allegiance, and the legacy of his bloodline. There is great darkness, cruelty and evil at the heart of the River Realm- but Eamon loves his men, strives to be a good leader- and craves to please his superiors and excel in his work. Part of his heart is still for the Master- although he believes and knows that the King is the true and rightful Lord.

Its true the book is a bit of a task at nearly 550 pages, it does lag in places, and the setting is a little unclear. Its got the Medieval type elements typical of the genre with swords, knights etc- but many other details, especially relating to army, seemed rather more modern. The characterisation was perhaps not all it should have been (but I don't think the Master's Hands- the Highest of his officers were meant to be well-rounded, complicated human beings).
Yet persistence paid off. I personally think that Eamon's struggle, central to the story, was was best and strongest aspect of it. He is torn, tempted, fails and is often in two minds. Part of him wants to please his superiors and just get on in the world- but another part is appaled by all that his 'duty' involves, and yearns for a higher calling under the service of the King.
By the end, Eamon wants to be free from both his oath the King and the Master, and just wants to live a peaceful life.

In a way, his experiences are reminiscent of the struggles that Christians face in thier own lives- and his frailty and helplessness are something we can identify with. Even his bad choices. One such choice involves falling for, and engaging in a sexual relationship with a noblewoman, Alessia Turnholt.
Other readers have flagged this up as an objectionable aspect which caused them to give the novel a lower rating. Its true that some scenes are bordering on a little bit descriptive- but I didn't feel they went as too far, and certainly weren't graphic. By the end, one could even understand what was happening- that both he and Alessia were being used and abused by the Master and his men- and that Eamon should have listened to the warnings of his friends.

Objection has also been raised to the langauge. The 'B' word is used quite a few times, not usually in context, as well as 'wh---' and 'damn'. Personally, this was not something I had a huge issue with. I'm afraid the 'B' word is something British people are inclined to come out with-and the author is British. I think very few of us are controlled enough to say, 'Oh my goodness, you're such a jerk!' all the time. Its just not realistic.
I understand that this might be a off-putting to a lot of Christian Fiction readers, so they might find the book is not for them.

However, I found it a satisfying and, in the end, compulsive read. Eamon fell, yet in the end, found his strength. There was also a wonderful note of hope, through the character of the young soldier Eamon took under his wing, Matatiah. A character who appears to be one of the weakest of the ranks, picked on by the others, but emerges as a wonderful example of unyeilding loyalty, courage, faith and endurance, it spite of his terrible suffering.

Don't know how long I'll be able to put off reading the next installment 'The King's Hand' to continue with Eamon's story (and hopefully more of Matatiah too). Recommended for lovers of more realistic fantasy, with deeper characters and themes.