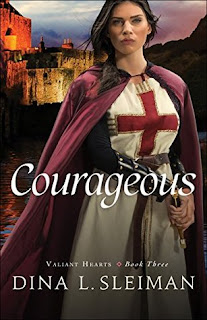 Inspired by the vision of the Young Lady Sapphira, Rosalind of Ipsworth joins a group of men, women, and children as a defender of the cross, seeking to free captives from prisons near Tripoli. She gladly gives herself to the cause, as she's haunted by a tragic mistake and no longer deserves such joys as marriage and family might bring.

Sir Randel Penigree was reared to serve in the church, but dreams of protecting the innocent as a knight. Joining a crusade to escape humiliation at home, he finds himself drawn to Rosalind as they partner to train and protect a group of young adolescents. When they face political machinations, danger, and an unknown enemy bent on their destruction, they are forced to reconsider their priorities and the very nature of the God they serve.

Courageous was a good read with an unusual setting, but I did feel that it was not as strong as the first book in this trilogy, Dauntless. Those who have read the previous titles will have come to know Rosalind, and the reasons why she felt she urgently needed forgiveness, and will have met many of the other characters including Sir Rendel.
The characterization was good and realistic, with both the protagonists wounded from past misdeeds and mistakes and yearning for redemption. As before, the children, with their individual personalities and foibles added a lot to the story, and the exploration of love, loss and relationships would appeal to the Young Adult audience (as well as older readers).

That said, I did not feel there was a lot to make this stand out from many other stories in this genre. Yes, it was set in the Middle East at the height of the Crusading period (in the early 13th century), but one gets the impression that with a few modifications it could have been set anywhere. Some of the cultural details about food, clothing and local religions were interesting- and trust me, I have visited North Africa, and I love the culture and food.
However, I did not appreciate how everything ‘European’ seemed to be cast as boring, stale or backwards, whereas everything Eastern was vibrant, exiting and exotic.
The wealthiest people would have had access to spices like cinnamon and even Cane Sugar in Europe by this time, so I found it hard to believe these were so new to everybody from that backwater of Europe.

After about halfway, the I felt the story became rather too politically correct and delved too much into mysticism for my liking, for example, the claim that the Crusaders had thrown the native people, the Saracens out of their homes. Well, it is true that there were atrocities on both sides, but the Arabs are not the indigenous people of most of the Islamic world, and in many places, they first came as invaders and conquerors. I’m not sure about Lebanon, but I think this applies there as well.

Also many of the conversations seemed ‘staged’ and contrived, just to explore the ‘issues’ which might be relevant to today, or the teachings of different religions, as did the whole ‘we all believe pretty much the same things and are all searching for love and truth so let’s get on’ spiel. Don't get me wrong, the portrayal of Muslims as normal human beings who wanted to live in peace was fine, but the way this content was delivered seemed to be more in line with modern ideas.

I was not comfortable with it in a lot of mystical prayer meeting scenes. Even some of the passages relating the Gospel seemed forced, contradicting a lot of the earlier content, as though they were put in just to make everything orthodox.
I’m not into mysticism at all, but there’s a heck of a lot of it here. Again, relating how the Grace of God can work in the hearts of hurting people was great, and even the idea of the lead characters being driven by visions, but all the other stuff I was not comfortable with.

Also, I did not appreciate the way that the Mainstream church was portrayed. The clergy corrupt, and the bad and mean character is the one who disapproves of mysticism- the other has leaning towards paganism. Also, bringing up the writings of Augustine just to pour scorn on them as ‘stupid’ and ‘ridiculous’ for being anti-sex was too much. Honestly, what is the point of historical fiction if we are just going to show contempt for every belief, practice, or idea from the time that does not line up with modern attitudes?

At the end, there were a lot of important messages about forgiveness and not having to earn salvation, and it was a decent story, but I did not appreciate a lot of the wishy-washy stuff. Other people might enjoy it more, but it does not rank amongst my favourites.

I requested a copy of this book via Netgalley to read and review. I was not required to write a positive one and all opinions expressed are my own.