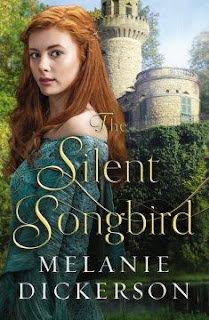 Evangeline is gifted with a heavenly voice, but she is trapped in a sinister betrothal—until she embarks on a daring escape and meets brave Westley le Wyse. Can he help her discover the freedom to sing again?

Desperate to flee a political marriage to her cousin King Richard II’s closest advisor, Lord Shiveley—a man twice her age with shadowy motives—Evangeline runs away and joins a small band of servants journeying back to Glynval, their home village.

Pretending to be mute, she gets to know Westley le Wyse, their handsome young leader, who is intrigued by the beautiful servant girl. But when the truth comes out, it may shatter any hope that love could grow between them.

More than Evangeline’s future is at stake as she finds herself entangled in a web of intrigue that threatens England’s monarchy. Should she give herself up to protect the only person who cares about her? If she does, who will save the king from a plot to steal his throne?

I have read everything by Melanie Dickerson, including all her fairy-tale retellings. This one is the long-awaited sequel to her earlier novel The Merchant’s Daughter, which I was looking forward to as its set-in England. Sadly, I was disappointed as I felt this was one of her weakest stories in terms of historical accuracy and certain details of the plot. That's just my opinion, take it or leave it, but let me elaborate further.

First off, I don’t like forced marriage stories. Why? Because the common assumption that forced marriage was normal in the Middle Ages is totally wrong. The church banned it from the twelfth century, so that any marriage which was conducted without the free consent of both parties was totally illegal.
So the fact that right in the first chapter, the heroine starts whining about her lack of freedom- before being faced with a forced marriage which then features very prominently throughout the story was sort of off-putting. (The legal ban is even mentioned- but hastily dismissed as though everyone could just ignore it when it was the church, not the King who had the jurisdiction over marriage.)
Ok so I could accept that in this instance, it was essential to the story- but not that the heroine was some kind of exception to all the weak, downtrodden, doormat Englishwomen who willingly accepted forced and unhappy marriages because they had not right to refuse.

Most of us Englishwomen are more contentious than that! We're a stubborn race. Also, the sources from the time show many examples of Medieval English noblewomen who married people of their own choice- including royal wards, judging from the number of fines made for marriage without Royal consent.

Moving on, I though this was, overall a decent story. As an adventure and fairy-tale retelling, it’s even quite good, and I could see the parallels with the Little Mermaid although it’s been a long time since I saw the movie.
I don't think I ever totally warmed to the heroine Evangeline though. She came across, at least at first, as shallow, self-centred and a childish brat. Her initial objections to her marriage were a good illustration- because her suitor was old and ugly. So, her love was dependent on looks and age, as if nobody ever found happiness with someone older, or not good looking? Shouldn't real love look past that?

Then, all of a sudden, Eva transforms into a strong, independent warrior woman when she takes some instruction in self-defence. OK, so that’s not improbable and we are told she had a rebellious streak. Yet mastering the longbow in 2 hours did not seem plausible at all. Medieval longbowmen trained for years, starting from when they were 7, with a weapon that had a draw weight of close to 90 pounds. Nobody learns to use one in 2 hours.
And her foot stomping when Westley told her to stay behind for her own safety? That did not make her look independent or capable at all. Really, why do female characters have to behave like utter brats, or do really reckless things to prove how 'strong' they are?

Westley was a better character, and it was nice to 'meet' his family again, although I did not feel that the details about their involvement in the Peasant's Revolt rang true. Primarily it about tax, not 'Freedom', did not involve villiens, and it was not just like a modern worker's strike. It was terribly violent, and culminated in the Archbishop of Canterbury being beheaded by a mob in the streets. I can totally understand why Westley's friend was so resentful over what happened to his father- someone in that situation does not need sanctimonous platitudes about equality of the classes.

Overall them, The Silent Songbird was worth a read, but the German- set stories are better, especially the last two The Golden Braid and The Beautiful Pretender. I do plan to read her next few books, I just hope they get better.

I requested a copy of this title from Booklook Bloggers with the intention of reading and reviewing it. I was not required to write a positive one and all opinions expressed are my own.