New Release: For Love and Honor by Jody Hedlund 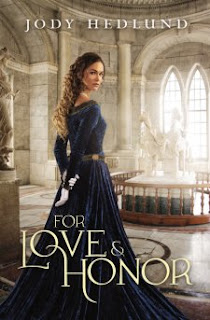 Lady Sabine is harboring a skin blemish, one, that if revealed, could cause her to be branded as a witch, put her life in danger, and damage her chances of making a good marriage. After all, what nobleman would want to marry a woman so flawed?

Sir Bennet is returning home to protect his family from an imminent attack by neighboring lords who seek repayment of debts. Without fortune or means to pay those debts, Sir Bennet realizes his only option is to make a marriage match with a wealthy noblewoman. As a man of honor, he loathes the idea of courting a woman for her money, but with time running out for his family’s safety, what other choice does he have?

As Lady Sabine and Sir Bennet are thrust together under dangerous circumstances, will they both be able to learn to trust each other enough to share their deepest secrets? Or will those secrets ultimately lead to their demise?

I shall humbly admit, the first two thirds of this book were an improvement on the last two, without all the silly, historically inaccurate rubbish that marred the two previous titles, and the disturbing obsession with torture. It was actually rather enjoyable with some of the banter between the two main characters, Sir Bennett and Lady Sabine. I would even go as far as to say that some of the details were quite credible, with Sabine’s interest in reading and some of the works mentioned. There were the usual problems with Americanisms though, and the mention of certain animals that would not have been found anywhere in Medieval Britain (or a fictional country based on it) such as mink and vultures.

Then things went rapidly downhill, when someone accused Sabine of being a ‘witch’ because of a birth mark, and in scenes reminiscent of Monty Python or Blackadder, wanted to grab her and burn her straight away, then and there. But that’s correct, cos’ those Medieval people were all so superstitious and ignorant that they would think anyone who was ‘different’ was a Devil worshipper?
No. Witchcraft was a religious offense, and in most of Europe, a person could only be tried and convicted by a church court under Canon Law. Trial oy Ordeal was banned on the orders of the Pope in 1215, and the real paranoia about witchcraft did not start until the sixteenth century, reaching its height in the seventeenth. The sort of things that happened to Sabine would fit into a seventeenth century setting under the Puritans, or in Salem Massachusetts, they don’t belong in the fourteenth century.

Why do I even bother to mention this? Mostly because there are people who treat this series as accurate Historical Fiction, and have even recommended it for history courses. It’s not Historical Fiction- it’s not set in England just because some of the place names are the same. Other details do not fit in with an English setting at all- for instance there being a High King. This story is fantasy, and should be taken as such- not accurate history. There are far too many inaccuracies and inconsistencies for a Medieval English setting, not to mention the downright silliness of the characters.

Seriously, what is the point of laying siege to a person’s home, and half destroying it because they owe you money, that’s not going to get it back- and Bennett’s resolve not to sell any of his treasures as equally absurd. What good is keeping hold of your treasured items going to do of you are going to be homeless. To be, honest, the fictional country that he characters inhabit must be the single worst-run state in Medieval History, with nobles constantly attacking and killing each other, every single forest and road crawling with bandits, and the central authorities only stepping in to ‘save the day’ when it’s almost too late.
Do people think Late Medieval England was actually like that? It was not. Nobles very rarely attacked each other, except during times of civil war, or on the borderlands with Scotland and Wales, which were notoriously lawless. Kings were supposed to maintain law and order, to keep the nobles in check, if they did not, they were failing to do their job.

It’s a shame, because this could have been a great love story, with a lot of positive messages about not judging by appearances. It could have been better executed without all the silliness about ‘witchcraft’ which was totally inaccurate, and could just been copied from some movie. I wish authors would take the trouble to do their research before writing Medieval Fiction to find out if the detials they want to include actually happened at that time, and if they are going to use a lot of artistic licence make it clear where they have done so.

I requested an e-book version of this title from Zondervan via Booklook Bloggers for review. I was not required to write a positive one and all opinions expressed are my own.