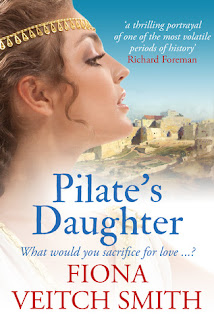 The Year is AD 28: In Roman-occupied Judea, Claudia Lucretia Pilate, daughter of the governor Pontius Pilate, is not happy with her father’s choice of husband for her – the handsome Roman Tribune Marcus Gaius Sejanus, who has been assigned the task of ridding Palestine of the troublesome Zealots.Lover of Greek myths and culture, Claudia has ideals of finding a partner of her own and she unwittingly falls in love with Judah ben Hillel, a young Jewish Zealot, who has been instructed by his kinsmen to kidnap and kill her.Meanwhile, Marcus has fallen in love himself with a beautiful slave-girl, Nebela, whose mother is the local soothsayer. Despite their different ranks in society, Nebela is determined that she, and not Claudia, shall marry Marcus, and with her mother’s help she weaves an intricate plot to try and get her way.Languishing in jail is John the Baptist, having prepared the way for the coming of the Messiah. Regarded by the Romans as a madman, John’s fate will be decided by the whims of the women in Herod’s household.Word on the street is that a Jewish prophet from Galilee has been causing unrest, drawing huge crowds to hear him speak and watch him perform wonders and healings.Claudia’s father, Pontius, becomes a key player in the final destiny of the prophet, and despite warnings from his wife after her vivid dreams, he is swept along by expectations of the Jewish leaders to uphold the local traditions and finds himself in a dangerously compromising situation.As the last days of Jesus are played out in Jerusalem, the future happiness of Claudia and Judah becomes ever more thwarted and the outcome played out in a wider arena than they ever imagined.A tale of star-crossed lovers, Pilate’s Daughter brings to the fore many lesser-known characters from the gospel accounts of Jesus, who mingle with fictional characters against the historical backdrop of Roman life in Palestine.

The first part of this story was probably the best, with the parts about the Pilate family and their move to Judea, and Claudia’s (Pilate’s daughter’s) attempts to educate herself. After the first few chapters, however, I felt it degenerated to the level of a TV or modern Hollywood ‘Biblical’ drama.
In a way, it’s one of those books that seems to have a bit of an identity crisis. The character’s outlook was way too modern for it to feel truly historical, and there were far too many sex scenes for it to be accepted in the mainstream Christian market, though I understand this was not the author’s intended audience.


The characters, including the main ones, seemed became ‘stock’ characters, with the pretty girl trapped in an unwanted marriage falling for the handsome rake trope, and there was a lot of telling instead of showing.
In the end, most of them came across as a bit vapid and shallow, even in their brushes with the supernatural or biblical figures. It’s like they were trying too hard to maintain a modern, sceptical objective worldview, which did not fit in with the period. On the plus side, some of the settings were well described, but I did not feel ‘transported’ back to the period with this novel.

I requested a copy of this book from the Publisher via Netgalley for review. I was not required to write a positive one and all opinions expressed are my own