The Revolt by Douglas Bond 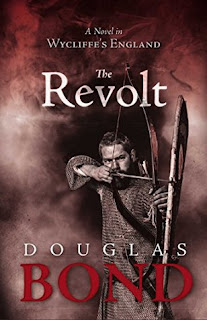 In his short career as a battle secretary, Hugh West’all has come close to death many times. But when he leaves the war behind to enter the hallowed halls of Oxford, he meets John of Wycliffe and soon embarks on a mission even more exciting—and perhaps just as dangerous.

Using his scribe’s quill to translate the Bible into English, the language of the common people, Hugh begins to understand the beauty of the gospel as never before. But he and his friends are up against the corrupt monolith of the medieval church, and it will stop at nothing to crush Wycliffe’s work.

It's an unfortunate fact that there is not a single novel about Wycliffe in the Christian Fiction genre written by a British author (unless you count G.A.Henty). It's high time that there was one because this novel was in some sense, everything I feared it would be (but hoped it would not). I fear that Americans are, sometimes, inclined to interpret every event in European history through the lens of American History.
I understand, it's natural, but it's also fraught with problems. Distinct comparisons to the American Revolutionary War. Readers might say 'what's wrong with that, it’s about the Peasant's Revolt?'. The problem is that Peasant's Revolt was not like that. Many of the people involved in it were not, in fact, peasants, or at least not villeins. Certainly not the poorest of the poor, but those of some wealth who had something to lose from taxation. Nor were they anti-monarchist republicans. They professed loyalty to the King.

That’s my main problem, it’s that fundamental misunderstanding of late Medieval English history and society that underpins books like this. Admittedly, many of the details about Wycliffe and his fictional clerk, Hugh Westall interesting, but it would have been better if this story was just about him and Wycliffe. A lot of the content involving the peasant protagonist Willard was, I felt, largely unnecessary.
As another reviewer mentioned, much of this book is just about Will and his family being subjected to 'social injustice' of various kinds, so that he became a cardboard cut-out. Always angry, always the victim only exists to create conflict or make a point.

There were also various historical errors or inaccuracies in the story. Probably the worst one was
when Oxford was described as a ‘village’. Oxford is not a village, it is a city, it has been since the 12th century.
Another error was that the dish Pottage was not always made from peas. It could be made from anything, the word just referred to any meal made in a single pot.
The reference towards the beginning about Willard and his family eating disgusting mush several days old from is taken from a children’s rhyme ‘Pease Pottage hot, pease pottae cold, pease pottage in the pot nine days old'.
I doubt it. No sensible peasant woman cooked so much pottage that it would last nine days, it'd mean she was being wasteful. I suspect the detail was added just to show how horrible and unfair the lives of peasants were.

There were also issues of continuity. Starting with Crecy in 1346 and ending with the Peasant's Revolt of 1381, the book should have spanned some 35 years, and yet the characters who should have been at least 50 by the end did not seem to age, one was still attending University. The cat the others acquired just after the plague was still alive at the end, which would make it 30 years old.
No mention of any condensing of dates for the sake of the story in the historical note, which just made it sort of odd.

Towards the end of the story, I felt the violence of the Peasant’s Revolt was underplayed, and the supposed ‘justice’ of the cause overstated. No mention was made of the killings or the fact that after the ‘heroic’ peasant mob stormed the Tower of London (which peasants were not locked up in), they dragged the Archbishop of Canterbury Simon Sudbury, out into the street and hacked his head off, and he was only one of many who were killed. Most of the figures of the established church are vilified as evil and corrupt (because there had to be bad guys), especially friars, who apparently loved nothing more than to go around raping women. All very stereotypical. I just hope readers won't base their knowledge of this period of history on this book.

By all means, authors should write about Wycliffe and his furthering the Gospel, but I think they need to be more careful about the moral lessons they seek to convey, because one that was conveyed here was that insurrection against perceived 'oppressors' could be in the will of God and consistent with some socio-political version of the Gospel.

I requested a PDF of this book from the publisher via Netgalley. I was not required to write a positive review and all opinions expressed are my own.