After a short break, I'm back to First Line Fridays this week. Life is still busy, but my plans to catch up on my Reading Challenge are going well after the Summer hiatus. Today I'm featuring the second in a series of sequels to a trilogy of tales that were first written 20 years ago.  The original Hawk and Dove Trilogy by British author Penelope Wilcock was a set of 3 short stories centred around a monastery in Yorkshire in the late 1300s.

Forget Cadfael, the Hawk and Dove is not a mystery series, but focused instead on specific characters: brothers of the fictional St Alcuin's monastery, using their lives and struggles to convey spiritual lessons. The first three stories entitled The Hawk and the Dove, The Wounds of God and The Long Fall placed particular emphasis on Abbot Peregrine, who took on the name Columba when be become a monk. His name was the source of the series title: Columba is the name of a Saint, but also means 'Dove', Peregrine means Hawk and is the name of a breed of falcon.
Fast forward to 2011 when a set of three sequels to the original trilogy was published by Crossway Books following the characters of the first series under the leadership of a new Abbott. A few years later, the series was taken on by British based publisher Lion Fiction, and three more titles were added taking the total up to 9.

I read the original trilogy back in 2014 and requested the three sequels from the Publisher more than a year ago. The first one (or the fourth book in the series), I read back in March before joining this group, and I'm just getting around to The Hour Before Dawn now.
Judging from some of the reviews, this title proved to be one of the most controversial in the series because it explores the impact of psychological and emotional trauma through the rape of one of the characters (the sister of one of the monks).
Now, I for one dislike the inclusion of content such as rape scenes in stories just for the sake of it, or just to crank up the drama: but nor do I shy away from books which explore difficult subjects. Readers will be able to read my opinion when I write the review. 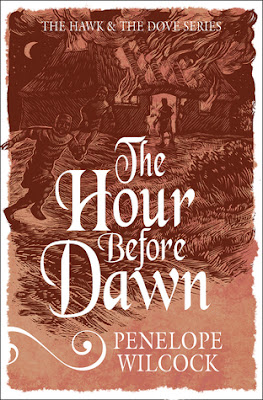 
"Tom!"
Brother Thomas thought he had never heard a monk shout so loud.

Remember to check out what the other members of this group are reading on their own websites. Until next time, have a great weekend and happy reading, with love from England.