The Space Between Words by Michele Phoenix 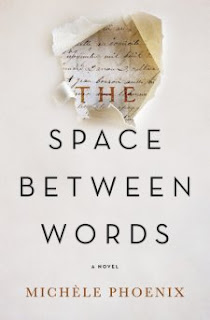 "There were seconds, when I woke, when the world felt unshrouded. Then memory returned."
When Jessica regains consciousness in a French hospital on the day after the Paris attacks, all she can think of is fleeing the site of the horror she survived. But Patrick, the steadfast friend who hasn’t left her side, urges her to reconsider her decision. Worn down by his insistence, she reluctantly agrees to follow through with the trip they’d planned before the tragedy.

“The pages found you,” Patrick whispered. “Now you need to figure out what they’re trying to say.”
During a stop at a country flea market, Jessica finds a faded document concealed in an antique. As new friends help her to translate the archaic French, they uncover the story of Adeline Baillard, a young woman who lived centuries before—her faith condemned, her life endangered, her community decimated by the Huguenot persecution.

“I write for our descendants, for those who will not understand the cost of our survival.”

Determined to learn the Baillard family’s fate, Jessica retraces their flight from France to England, spurred on by a need she doesn’t understand.Could this stranger who lived three hundred years before hold the key to Jessica’s survival?


I know, I always say that I don’t like and don’t tend to read contemporary fiction. But ‘timeslip’ novels aren’t quite the same, right? They’re partly historical. Besides, since reading Catching the Wind by Melanie Dobson I have come to rather like them.

I know some people have complained that the historical aspects of this work are in the background. Only a small part of it relates the actual story of the Huguenot Bayard family in 17th century France. I did not find that to be a problem myself and liked how their story became interwoven with that of Jessica, and her search for truth and healing with all that had happened to her.

Personally, I also think there was meant to be a connection in the way that the 17th-century French peasant girl and the modern American protagonists in their response to violence, evil and intolerance, and the worst actions of human beings. All in all, it was just a well told, tightly plotted story about faith, endurance, and survival during terrible trauma and adversity which I enjoyed.

I requested a copy of this book from Booklook Bloggers and purchased the audiobook of my own volition. I was not required to write a positive review, and all opinions expressed are my own.