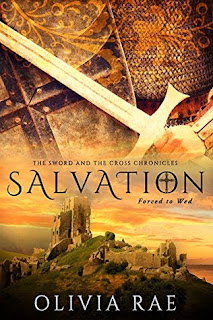 With the death of her husband, independent Lady Breanna Durville is finally free of male control and happily waits the birth of her child…alone. But her late husband’s cousin, Lord de Beaufou has come to claim his rights to Durville Keep and to her hand in marriage. If that is not enough to deal with, her brother has sent a peasant to watch over her. She has but one plan. Get rid of them both!

Tormented by is past, Royce Canwell leaves the unrest in the Holy Land and returns to England to fulfill an oath to a friend—go to Durville Keep and ensure all is well with the man’s sister. But upon arrival Royce discovers Lady Breanna’s situation is more precarious than he expected. Though he longs for a simple life in which to heal his wounded soul, he finds himself sacrificing his hopes, his dreams, and even his heart to give Lady Breanna the future she wants and deserves.

This was a frustrating book, so full of contradictions. I neither totally loved it nor entirely hated it, and it did improve towards the end, but there were a lot of things which annoyed me.

For a start the heroine Breanna. I think with hindsight that I found her an inconsistent character. She's supposed to be a strong and independent woman: in fact so much so that she does not even have an Steward, an official who was essential to the day to day running of a Medieval estate. Instead she does all the accounts herself, and takes a personal interest in the finer points of farming. Something which Medieval Aristocrats would not have been personally involved in.
So she's stressed out an doesn't have much time: but doesn't need a man's help, thankyou very much!

She's also supposed to be so 'feisty' and strong that could flatten a man with a single punch, and at one points, picks up a bench and hits a male character with it. Which would suggest she possessed a remarkable degree of physical strength.
Yet for all this, she was apparently 'ruled' by a husband for years, and is virtually helpless against the machinations of the villain.

I don't accept that her helplessness was the result of repressive social customs which stripped her of power. As a noble widow, she should not have lost everything: she would be entitled to dower. Contrary to what the characters thought, a girl would also have been eligible to inherit: Eleanor of Aquitaine inherited the Duchy of Aquitaine from her father.

The passage about the villain trying to undermine her with allegations of witchcraft really got to me: spreading rumours that she was a witch because she put benches in the chapel. Seriously? Like Medieval people thought chairs were of the Devil or something. Even the part about holding prayers in English did not entirely ring true, unless it was done for the benefit of the servants, since most nobles would have spoken Norman French as their first language.
Yet for all this, a character very publicly announcing that he rejected the tenants of Christianity and making some rather profane statements was no problem but putting benches in the chapel was WITCHCRAFT!


This novel was given a 'historical' feel with the characters speaking a type of pseudo-archaic English: 'mayhap' and 'methinks' and 'ye', although it was still peppered with modern Americanisms such as 'whomever' and 'smart'.
As with other such novels the business of the characters was of such import as to warrant personal involvement by the royal family: which seems odd.
Even if a claimant to the estate was a friend of the King, Henry II ruled most of England and a good proportion of France: you'd think he'd have more important things to worry about with than who the widow of a country baron married, and who owned a castle surrounded by a few farms.

Yet for all that: I can understand why such content was included. It was necessary to build the story. Which was did have some well-written scenes with plenty of adventure. Even the romance between Brianna and Royce was interesting , if rather explosive at times. Their tempestuous relationship allowed for some comical moments, if nothing else. After about the midway point I cared enough to keep reading to see how it ended.

So I suppose this book is a good choice if you want a vaguely romance which is vaguely historical and isn't too taxing. Its not bad for a first novel, either.