The Sea Before Us by Sarah Sundin Review 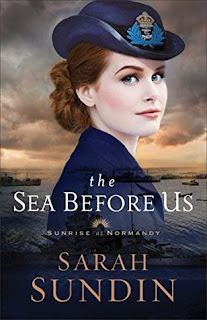 In 1944, American naval officer Lt. Wyatt Paxton arrives in London to prepare for the Allied invasion of France. He works closely with Dorothy Fairfax, a 'Wren' in the Women's Royal Naval Service. Dorothy pieces together reconnaissance photographs with thousands of holiday snapshots of France--including those of her own family's summer home--in order to create accurate maps of Normandy. Maps that Wyatt will turn into naval bombardment plans.

As the two spend concentrated time together in the pressure cooker of war, their deepening friendship threatens to turn to love. Dorothy must resist its pull. Her bereaved father depends on her, and her heart already belongs to another man. Wyatt too has much to lose. The closer he gets to Dorothy, the more he fears his efforts to win the war will destroy everything she has ever loved.

I don’t read a lot of novels set during the Second World War (less than I could count on one hand, probably), but I saw that this one was very popular. Also, one major attraction was that unlike a lot of novels and movies set in this period is that it didn’t just involve on US Army. Sorry everyone, but there is a bit of an American-centric focus in a lot of these things.

I can be a slow reader when it comes to books from Netgalley, so I confess, I cheated and finished this one on audio. Overall, I was pleasantly surprised: the relationship between Dorothy and Wyatt developed slowly from friendship, so it was not instalove. What’s more the protagonists had lives outside the romance. We could read about what they were up to when they weren’t together, which was nice.

Also, the story didn’t get bogged down with details about the Normandy landings and the events of the war. Which is not to say the historical details were ignored, they were just worked well into the story, and all seemed authentic to me. I also liked he treatment of the central themes with two flawed characters who were struggling with personal tragedy and duty.
For one, in increased his faith, and for the other, drove her away. Wyatt was patient and genuine with Dorothy, not preaching at or bashing her, but rather making her think, and allowing for her religious doubts.

My only complaints were the usual Americanisms coming from the British characters. One said ‘gotten’ and another said ‘sidewalk’ at one point. Which was unfortunate but kind of expected.
Overall though, I really enjoyed the book, and would recommend to all lovers of Historical Fiction and WW2 novels.

I requested a copy of this title from the publisher via Netgalley/Revell Reads. I was not required to write a positive review and all opinions expressed are my own.