I'm back again after a week hiatus. I've been doing a fair deal of reading, but also been a little busy and other the weather the last few days, and it turns out I have contracted Hand, Foot and Mouth disease from my infant nephew. Sounds nasty, but its not too severe and hopefully I will get over it soon.

Today I am going to share a book which has just recently come out in audio. Its a Regency written by a British author. Her previous two books were tremendous fun, and this one looks to be as well. 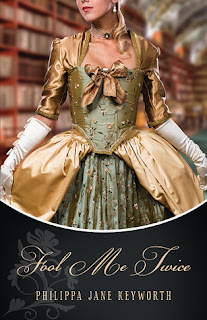 In the gaming hells of eighteenth century London, orphan Caro Worth is leading a double life. By day she plays a proper gentlewoman on the lookout for a wealthy husband. By night she plays the infamous Angelica, her fictional half-sister with a talent for cards and an ability to finance the life her respectable self has built.
An introduction to a rich Marquis brings marriage and security within Caro’s grasp…until the arrival of the unpredictable and totally ineligible Mr. Tobias Felton.

Dismayed by Felton’s persistent appearances, shocking frankness, and enigmatic green eyes, Caro watches helplessly as he comes closer than anyone to guessing her secret, but when complete and utter ruin threatens, she finds that Felton’s suspicions just might become her salvation.
As the walls she has built to protect herself crumble down around her, Caro learns that no matter how careful your plans, life and love have a habit of falling quite spectacularly out of control!

"Are you always so demanding?" asked Lord Avers, smiling saucily and flashing his white teeth as he gave up a card to the player beside him.

That's My First Line for this week. Don't forget to click the Meme and see what everyone else is reading.