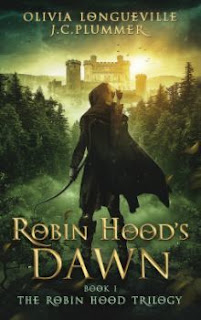 England, 1154-1194
A kingdom under assault.
A conspiracy born of anarchy.
A hero standing against tyranny.

Leading a band of men against the injustices of a malevolent sheriff and his henchmen, Robin begins to unravel a web of treachery threatening the English royal family.

As shadowy forces gather to destroy the future of a nation, Robin faces deceit, betrayal, and the ravages of war as he defends his king, his country, his people, and the woman he loves from a conspiracy so diabolical, so unexpected, that the course of history hangs in the balance.

From the mists of an ancient woodland, to lavish royal courts teeming with intrigue, to the exotic shores of the Holy Land - Robin Hood leads the fight in a battle between good and evil, justice and tyranny, the future and the past.

Part one of an exciting three-part retelling of the Robin Hood legend!

I don't usually read Robin Hood retellings, and I think to be honest all the girl Robin Hood type stories have put me off. But I requested this one late last year, and only just got around to reading it now.

This novel was solidly based in history: there are even family trees and a glossary at the end. This was one of its strengths as I think it made many of the recognizable characters and events we're used to from other Robin Hood stories more plausible. And there are certainly scenes and events readers will recognize, some resembling movies or TV versions of the story.

It also gave an authenticity to some of the smaller details like Robin and Marian's betrothal; and the early years of the reign of Richard the Lionheart.
The prologue also sets up a very interesting background for the characters, and especially for the actions of the Sheriff.

The characters were all pretty well-developed, including Robin and Marian, who goes from an innocent and naive girl to an assertive young woman- but by the end of the story is turning into something darker, but I don't want to give away the ending.
Guy of Gisborne may have been one of the best developed characters. I've long been sympathetic to him other Robin Hood stories, and I cannot help feeling a little sorry for him here. Yes he's delusional and violent, but the Sheriff seems to exercise a certain kind of psychological control over him.

My friends and followers might wish to note that this is a general market title: NOT inspirational fiction which I often review.
Religion does play a role in the character's lives, as a reflection of the time. The characters go to Mass, attend church and refer to religious rules and beliefs, but there is swearing and a couple of sex references. Nothing is graphic, but one scene did get a little descriptive. There was more emphasis on flowery language about emotions than anything else though, thankfully.

Its interesting that there was no Friar Tuck among Robin's merry men, until right at the end when a character called Tuck is introduced. He's a Knight Templar, so that raises some great possibilities for the next story.
I cannot wait for Robin Hood's Widow, and hope that the authors can find a publisher for it soon.

I'd heartily recommend this one to any historical fiction lover who wants a story that is not too dark or intense, but is very accurate. Its a nice change from the typical Romances, which some Robin Hood re-tellings and a lot of Medieval Fiction seems to be.

I reviewed this book of my own volition, requesting the PDF from Angevin World Publishing on Netgalley. I was not required to write a positive review an all opinions expressed are my own.