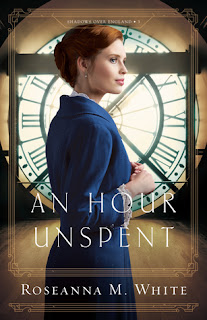 Once London’s top thief, Barclay Pearce has turned his back on his life of crime and now uses his skills for a nation at war. But not until he rescues a clockmaker’s daughter from a mugging does he begin to wonder what his future might hold.

Evelina Manning has constantly fought for independence but she certainly never meant for it to inspire her fiancé to end the engagement and enlist in the army. When the intriguing man who saved her returns to the Manning residence to study clockwork repair with her father, she can’t help being interested. But she soon learns that nothing with Barclay Pearce is as simple as it seems.

As 1915 England plunges ever deeper into war, the work of an ingenious clockmaker may give England an unbeatable military edge—and Germany realizes it as well. Evelina’s father soon finds his whole family in danger—and it may just take a reformed thief to steal the time they need to escape it.

Ever wondered about Barclay Peirce? The enigmatic big brother/father figure to the gang of London Thieves who form the bases of this trilogy. An Hour Unspent is his story. Barclay is a former thief and reformed criminal with a big heart, who took in street children and orphan's like himself. His self-sacrificial and giving nature really comes across in this story. Despite his background he wants to do what's right in the best way he can.

Now working with the 'Admiralty' really the Secret Service, Barclay is given an assignment to work with an Austrian born clock-maker, but the first person he meets is his daughter Evelina who he runs into when she's about to be mugged. Barclay finds ‘Lina fascinating for her inner strength and caring nature, although she only finds herself attracted to him on the rebound from a failed engagement.

Both Barclay and Evalina struggle to find their place in the world. Evalina believes she can neither love nor be loved. She puts her efforts into the Suffragette cause to fill the void of what she believes is her loveless life.
Barclay cares for his adoptive ‘family’ but in this we find out that he is in some sense compensating for losing contact with his birth brother
Barclay and Eve’s relationship develops and simmers slowly, without insta-love or too many mushy scenes.

As with the other books in this series, the historical backdrop is strong, and Mrs White has a great way of working history into the story. This was set in 1916, by which time WWI was underway, and Britain is threatened by Zeppelin raids. The detail is wonderful: not just the historical detail, but also smaller details about London streets and boroughs and which ones were considered richer and more upper class, and there was even a smattering of Cockney Rhyming Slang.
I also liked how Barclays work with the clockmaker was made to tie up perfectly with some other details from the period: like the invention of Rolex wristwatches and early aeroplane technology. The author even managed to work in a reference to little known battle.

Also, the cast of secondary characters added a lot of depth and interest to the story, especially Barclays brothers and sisters. Rosemary and Willa, the protagonists from the last two stories return: but some of the younger children also come into their own including Lucy the half-Indian girl who doubles and a cook and an impromptu spy. Despite being rescued as a baby, Lucy apparently had some sense of her background with her love of spicy dishes.
The faith elements were also worked very well into this story without being preachy, and there were some wonderful messages about love, loyalty and family.

I only noticed one or two errors. One character refers to the ‘sidewalk’, which is an Americanism. Also, I’ve noticed with several stories like this the confusion between ‘pence’ which is supposed to be plural and ‘penny’ the singular form. ‘without a pence to my name’ just does not sound right. Even my computer wants to correct it as a grammar error,

An Hour Unspent was a worthwhile and truly worthy conclusion to the trilogy, although there is a hint that some characters may reappear in a new series that the author is working on. Even for someone who has only started reading novels set in this period recently (a couple of years ago), I would rank this series as one of my favourites.

I requested a paperback of this title from the publisher’s UK distributors and purchased the audiobook of my own volition. I was not required to write a positive review an all opinions expressed are my own.