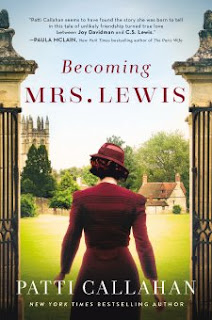 In a most improbable friendship, she found love. In a world where women were silenced, she found her voice.

From New York Times bestselling author Patti Callahan comes an exquisite novel of Joy Davidman, the woman C. S. Lewis called “my whole world.” When poet and writer Joy Davidman began writing letters to C. S. Lewis—known as Jack—she was looking for spiritual answers, not love. Love, after all, wasn’t holding together her crumbling marriage.
Everything about New Yorker Joy seemed ill-matched for an Oxford don and the beloved writer of Narnia, yet their minds bonded over their letters. Embarking on the adventure of her life, Joy traveled from America to England and back again, facing heartbreak and poverty, discovering friendship and faith, and against all odds, finding a love that even the threat of death couldn’t destroy.

In this masterful exploration of one of the greatest love stories of modern times, we meet a brilliant writer, a fiercely independent mother, and a passionate woman who changed the life of this respected author and inspired books that still enchant us and change us. Joy lived at a time when women weren’t meant to have a voice—and yet her love for Jack gave them both voices they didn’t know they had.

At once a fascinating historical novel and a glimpse into a writer’s life, Becoming Mrs. Lewis is above all a love story—a love of literature and ideas and a love between a husband and wife that, in the end, was not impossible at all.

*Ebook and audio versions of this title are currently unavailable in Europe.

As a pretty much lifelong Lewis fan who's watched the movie Shadowlands , I knew I'd request this one once it became available.

I loved this as a vivid, realistic and emotional account of Lewis life with Joy Davidman, the American poet and writer of Jewish heritage he ended up marrying.
Since its written from her perspective there is a lot about her life before she met him. I never really knew Joy was a well-known and successful author in her own right.

Like many other Joy wrote to Lewis at the time of her own conversion. Lewis' radio talks and popular books made many who had not met him consider him a spiritual mentor, even though he openly said he was not a theologian.
Such was the case with Joy Davidman at the hardest time in her life, when her marriage was crumbling due to her husband's alcoholism and she was searching for truth.

The compassion, understanding and patient insights from a man halfway across the world drew her in. Lewis and Joy were kindred spirits, even if they seemed so different in lifestyle, background and temperament.
I appreciated the way the novel described their unfolding relationship, growing from a friendship which blooming from a mutual love of Literature, Mythology and the written word as well as a shared faith which as is once said 'crept up on them' unexpectedly.

This is a warts and all perspective of the lives of the central figures. By turn ran and honest, and 'naked'. Everything is laid bare, and I meant everything: including mentions ofpre-marital and extra-marital affairs and liaisons engaged in by Joy and others.
The downside to this is that there were times when her character came over as: for lack of a better word a- a man eater.
There were times when I felt her yearning for Lewis to express his love in a physical way became a little overbearing. I understand she yearned for love, but had problems understanding that there was more to emotional and romantic fulfillment than sex. Or rather had learn that during her time with Lewis.

The description of him as a man devoted to Classical virtue, including the Medieval concept of platonic love or courtly love was one I found fascinating.
Overall this was novel was intense. Full of raw emotion, love, hope and heartbreak, which ends in a sad but hopeful note.
To refer to death as the time until 'I cling to the Great Lion, bury my face in his mane, and fall to my knees in surrender' was poignant and beautiful.

I think all fans of the work of Lewis will like this book, notwithstanding some of the content warnings. It will certainly make me appreciate more the woman who had such an influence on Lewis later work.

I requested a copy of this book from Thomas Nelson via BookLook Bloggers. I was not required to write a positive review and all opinions expressed are my own.