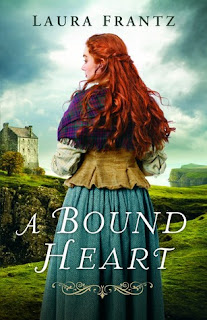 Though Magnus MacLeish and Lark MacDougall grew up on the same castle grounds, Magnus is now laird of the great house and the Isle of Kerrera. Lark is but the keeper of his bees and the woman he is hoping will provide a tincture that might help his ailing wife conceive and bear him an heir.

But when his wife dies suddenly, Magnus and Lark find themselves caught up in a whirlwind of accusations, expelled from their beloved island, and sold as indentured servants across the Atlantic. Yet even when all hope seems dashed against the rocky coastline of the Virginia colony, it may be that in this New World the two of them could make a new beginning—together.

Reading a book by an author entirely new to me is always an interesting experience.
This novel was well-written, and I can understand why many people like this author's books. The settings are vivid and the characters well-drawn, especially Lark. She's a herbalist and beekeeper, and often misunderstood profession. So there are a lot of details about different medicinal herbs and their purposes: fans of Cadfael like myself really go in for things like that. Nerdy I know.

The main reason for my lower rating was that I felt, sadly, there were a few too many mistakes. I had reservations about a book set in Scotland by an American author, and sadly those were realized. I mean obviously Mrs Frantz has researched the language and landscape of the Isle of Kerrara (which I realize I might actually have seen at one point when staying in nearly Oban).

There was the usual issue of Americanisms from the Scottish characters, which could be rather jarring. Eating with only a fork for example, and some geographical errors. The Isle of Man is located in the Irish Sea not the English Channel.
In another place there was a reference to a woman singing a child a lullaby about picking blueberries. Blueberries were not introduced to Britain until the 1850s: so that clearly isn't a British song.

I think at times there was a tendency to fall back on some stereotypes. Like the characters were a bit too exaggeratedly Scottish.
Not everyone in Scotland uses peat on their fires for example. Its not compulsory: its used where peat bogs are common: in England, Scotland and Ireland. Elsewhere people used regular wood fires, or coal.

My main objection though was the mischaracterization of the Jacobite rebellion. Here, as with many other novels set in this period its cast has having been a simplistic conflict between the Scottish and the English. Except it wasn't. It was more Catholic vs. Protestant, although there were some English and French soldiers on the Jacobite side: and more importantly many Scots were against the Jacobites.

More significantly, Lark and Magnus are supposed to be Presbyterians. Presbyterians by and large, were hostile to Catholics, and were highly unlikely to have fought on the side of the Catholic claimant Bonnie Prince Charlie. So I found the whole backstory about Magnus and his father  very improbable.

I did appreciate the spiritual themes in the story and that it was lighter on the Romance side. I'd also certainly consider more by this author, but I do wonder at the proliferation of books involving Scottish characters sent to America in the mid 1700s this year.
They're inspired I think by the Outlander series; and the trouble with novels inspired by TV series is that they can be a hit and miss, especially if the authors are not very familiar with the country or culture where the characters originate from.

Thanks to Revell and Netgalley for allowing me to read an E-Galley of this book. I was not required to write a positive one and all opinions expressed are my own.