I have not posted in nearly a month. Life has just happened, and I've been too busy or just forgotten. I have actually read a few books since February 8th, and I have a couple of reviews I could post here. In fact, the book I featured last time is currently on sale for 99c or 99pence in real money.

I'm posting today on a book I've had on my shelf since last year, and I have been gradually making my way through it. Or rather the audio editions. In Britain, we have something called Wordsworth Classics, which are cheap but good quality paperback editions of almost every work of classic literature ever written.

You might know about the BBC Series The Father Brown Mysteries. Its supposed to be based on a series of short stories by G.K. Chesterton, a journalist and author who died in 1933. I say 'supposed to be' because the modern version bears almost no resemblance on the original stories, which were originally published in magazines and newspapers in the early 20th century.

I genuinely love the original stories, which explore philosophy, theology and history in a lot more detail than the new versions. They say the book is always better, and in the case of Father Brown that's certainly true. 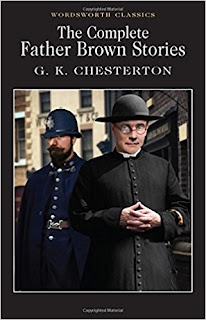 Father Brown, one of the most quirkily genial and lovable characters to emerge from English detective fiction, first made his appearance in The Innocence of Father Brown in 1911. That first collection of stories established G.K. Chesterton's kindly cleric in the front rank of eccentric sleuths.

This complete collection contains all the favourite Father Brown stories, showing a quiet wit and compassion that has endeared him to many, whilst solving his mysteries by a mixture of imagination and a sympathetic worldliness in a totally believable manner.

The Stories are divided into Five 'Books' (and some later additions), and my First Line today comes from the 3rd book in the collection The Incredulity of Father Brown.

"There was a brief period during which Father Brown enjoyed, or rather did not enjoy something like fame. He was a nine days wonder in the newspapers"