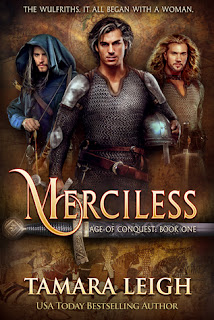 
The Wulfriths. It all began with a woman.

A battle. A crown. The conqueror. The conquered. Medieval England—forever changed by the Battle of Hastings. And the rise of the formidable Wulfriths.

An honorable Norman
Chevalier Cyr D’Argent convinced himself he joined Duke William’s invasion of England to reform its church and place its rightful king on the throne. But after a decisive Norman victory, the truth of his quest is revealed when his search for fallen kin leads to a Saxon grieving a boy slain. Certain the defiant young woman will become plunder, he forces her off the battlefield. Following a pilgrimage of penance, Cyr returns to England to seek his missing brother and claim the barony awarded by King William who stipulates he end the rebellion on his lands. He agrees, only to discover the woman he cannot forget is among those he must vanquish—and may even be their leader.

A rebellious Saxon
On a fateful autumn day in 1066, Aelfled of Wulfen’s mistake leads to the death of her lady’s son. Unforgivable—as is the silver-haired warrior who tempts her to put a blade in his back then does the unthinkable in protecting her from his fellow Normans. Now under the usurper’s rule, faith crippled by her people’s suffering, she finds her sanctuary threatened —and destroyed when betrayal delivers her into the hands of the man who haunts her dreams. As the fires of unrest scorch lives and lands, Aelfled struggles to shield her heart as well as her people. But perhaps love can unite Normans and Saxons. Perhaps she is meant to be here…with him…for such a time as this.

I didn't know that to expect with this new series, but I purchased the book way back last year so decided it was time to get to it.

I actually really liked it. It created a strong sense of what the years immediately following the Norman Conquest might have been like. Turbulent and troubled, with rebellions and many of the English refused to accept their Norman overlords. English was 'not on its knees, nor was it on its feet', as is stated in the book.
The Normans regard the English as 'heathens'. Which this Englishwoman thinks is downright cheeky, since we were Christians when their ancestors were still Viking pirates.

There are some colourful new characters to follow, and once again its a large family of siblings, with a couple of extended relatives (a cousin and Aunt), who will probably all forge out their own stories. There is romance, but I think its sort of slow burning, and takes a bit of a back foot at times with all the intrigue and talk of rebellions and uprisings.

I only had a couple of historical niggles. First off, the number of castles only 2 years after the Battle of Hastings. There were a few before the Conquest, but they were very much a Norman and continental thing, and most were not erected until several years after the conquest: and most were simple Motte and Bailey affairs at this time. The architecture described just seemed too seem more like the castles of much later periods.

Second, there were a couple of references to rotten teeth, which I think is something of a misconception. Archeologists have said that the Saxons had really good teeth. They simply did not have access to processed sugar in their diet, so tooth decay just wasn't really an issue then.

Also, some of the fighting styles. Almost all of the characters fight primarily or exclusively with swords. Yet the Bayeux tapestry and other sources from this period suggest people using spears on horseback and even axes. Not just swords.

Aside from those minor issues though I really enjoyed this, and look forward to the second book which I have waiting on my Kindle.