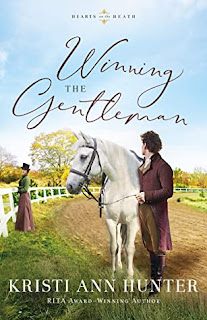 Aaron Whitworth hasn't had control over most aspects of his life, but he's always taken pride in being an honorable businessman and better-than-average horseman. When both of those claims are threatened, he makes the desperate decision to hire the horse trainer of a traveling circus as a temporary jockey for his racehorses.

Sophia Fitzroy knows that most horsemen don't take her seriously because she's a woman, but she can't pass up the opportunity to get away from the tumultuous world of travel and performing. As she fights for the right to do the work she was hired for, she learns the fight for Aaron's guarded heart might be an even more worthwhile challenge.

As secrets come to light and past vulnerabilities are confronted, will Aaron and Sophia sacrifice their former dreams and forge a new one together--against all odds?

I enjoyed this second installment in Kristi Ann Hunter's new series. There were a few of the normal issues with American terms and mannerisms imported into 19th century Britain. The one which stood out the most her was the way the characters ate: with only a fork in the American manner, instead of using a knife and fork, as would have been the norm in polite British society at this time.

However, that was my only real niggle with the story. Otherwise, it was a great story with an unsual setting. I liked the Irish heroine, and the walk on roles by the protaganists of previous stories by this author.

Thanks to Bethany House for allowing me to read a galley of this title. I was not required to write a positive review, and all opinions expressed herein are my own.