Review of Games of God and Men by Robin Hardy 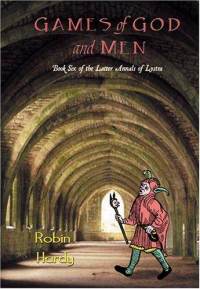 "Driven to distraction keeping control of twin twelve-year-old daughters, Surchatain Ares welcomes the services of a jester at the palace of Westford. Upon finding himself a celebrity and a confidant of the Surchatain, the jester attempts to discredit his main rival for Ares’ attention: the Surchataine Nicole. In countering the jester’s attack, Nicole turns to the superior gamesmanship of the beautiful, heartless Chataine Renée, who plays her part with such skill that the jester becomes a pawn in a power struggle between two provinces. However, the game is altered by the unexpected entrance of another player—Renée’s younger brother Henry. Exiled for his faithfulness, struggling with the apparent capriciousness of God, Henry makes the move that determines the game’s outcome."


As ‘historical’ fantasy goes, this series has to be one of the worst I have ever read. The ‘Medieval’ historical setting is (to borrow a term someone else used) nothing more than superficial ‘window dressing’, the characters are more like modern people in fancy dress than Medieval people. Their beliefs, attitudes and values are largely inconsistent with their time and their speech and language is sometimes just- bizarre. Many of the characters use modern Americanisms and slang words which just seem very noticeable. They seem to ‘sound’ just like Americans, not like Medieval Europeans at all. The only exception is one particular character, a member of the Royal Household named Renee, whose use of Long words and High register language gave me the impression that she was supposed to have a High Class pseudo-‘British’ accent of some description.

Alongside the anachronisms (for instance spray perfume bottles), there seems to be a general tendency amongst the characters to share and reflect modern standards and attitudes by taking a negative stance towards things that modern people might see as unpleasant or unpalatable. Yet there seems to be no effort on the part of the author to understand or appreciate the differences in attitudes that people had in the past, or see things the way they did, even if we do not agree with them.
For instance, one of the characters’ main concerns in this novel is dealing with the evil King of a neighbouring country who uses torture and supports slave traders (ignoring the way in which Renee abuses and mistreats others in their own country), or much attention is devoted to dealing with slave traders elsewhere.  This could be justifiable in some instances, but in this and other novels in the series in does seem to cause the story and characters to have and almost self-righteous and polemical tone towards actual or perceived social ills.

The most troubling aspect of this novel however was the characters’ attitudes towards morality, in particular sexual morality, especially on the part of the Christian characters. On the surface, it appears that the characters concept of honour and decency are entirely consistent with the importance that medieval people might have placed on these virtues. Ares the Surchatain (equivalent to a King) is prepared to literally kill to protect and defend the honour of his 12 year old daughter Bonnie, whose actions had to potential to unwittingly put her in a compromising situation.
Ares’ actions result from his fear that his young daughter’s reputation could be destroyed because of the way in which such behaviour would be seen and perceived by others, even though nothing actually happened.  Bonnie was however an innocent and relatively naïve 12 year old who likely did not realise or appreciate the potential sexual connotations which might be perceived by her arranging to meet a man by herself.

Yet, later on the novel a character called Renee, who is known for being sexually promiscuous (indeed she boasts about and flaunts this) behaves in a way that is not only inappropriate, but downright indecent and obscene in public. That is, after a jester addressed a sexually explicit love song towards her, she expressed her thanks by laying her breasts against his body, kissing him passionately, and telling him to come to her bedroom later- in full view of everyone at the feasting table. Yet the same people who Ares feared would be regard the innocent social faux-pas of his daughter as so heinous consider Renee’s behaviour here to be perfectly acceptable, and in no way detrimental to her ‘good name’ or ‘reputation’. They still regard her as ‘respectable’ and ‘virtuous’ both before and after this incident.

It would appear then, the Lystrans do not consider such acts of shameless wantonness to be in any way contrary to their notion of what constitutes ‘decency’ and ‘respectability’. This seems to be  further evidenced by another incident involving Renee in which it was revealed that she had entertained no fewer than 5 sexual partners in one month, who had ‘visited’ her some 12 times during that period. Ares' wife Nicole fears that if news of this becomes public, it will damage Renee’s ‘reputation’, and despite her husband’s assurances that many people know anyway, Nicole goes to great pains to hide the truth about Renee’s sexual misconduct from as many people as possible. At one point she even told that if she is not more careful the wicked servants would start gossiping and spreading false rumours about her- or to put it another way they will speak the truth about her immorality and licentiousness.

The implications of this may be important- they seem to show that even though Nicole is a ‘Christian’ she apparently does not see anything wrong with upholding and maintaining a blatant falsehood about Renee’s behaviour and conduct. She and Ares do not stop Renee from having men in her bedroom; they just make sure that as few people know about it as possible, and regard those who would speak the truth as liars and gossips, whilst still regarding Renee as ‘respectable’ and virtuous.

Later on Nicole further revealed her unscrupulous and scheming side by asking Renee to use her ‘wiles’ to get information out of the aforementioned Jester (who had been caused Ares to distrust her). Basically, this involves Renee seducing the jester, and in the midst of doing so he reveals that he once stroked a ladies’ foot when he had acted as her confessor. In a display of ludicrous moral hypocrisy of the highest order Renee was shocked and outraged by the revelation, and judges the jester’s behaviour to be ‘indecent’ and ‘obscene’ - as though she were some blushing maiden.

It did not occur to her that considering her own behaviour and lifestyle, she was in no position to judge anyone else’s behaviour in such a way, and that what the jester’s actions were positively tame and innocent in comparison to her own. The hypocrisy does not stop here; however, as Renee goes ober in her mind how she would throw the jester down a well if he ever tried to act 'inappropriately' towards her- even whilst she is passionately kissing and embracing him.
So it is perfectly acceptable for her to behave like a slut and have sex with as many men as she wishes, yet in her mind, any man who behaves 'inappropriately' towards a woman is evil and lecherous. This apparent inconsistency in attitude towards sexual immorality on the part of women and opposed to men is particularly worrisome element of this series.

Such hypocrisy, double standards and seeming misrepresentations of the truth are all too common in this series. It appears that the author wants the audience to believe, like the characters do, that Renee is a ‘good girl’ really- a model of moral virtue who is outraged by sexual misconduct- on the part of men anyway.