'A Heart Decieved' by Michelle Griep 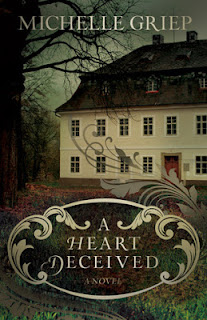 A Heart Deceived  Michelle Griep
20th June 2013, 387 Pages
A Heart Deceived breaks rather new ground for author Michelle Griep. A regency as you likely have not seen it before. Little in the way of bonnets and balls here, rather this story opts for darker and more difficult subject matter including drug addiction, corruption, madness and even murder, but also redemption and a hint of romance.
The central characters Miri and Ethan were certainly interesting and well- drawn, though Ethan’s ‘journey’ and struggles are perhaps more poignant and his story perhaps a little more complete.
The romantic elements also seem to be generally done well, except some passages I did not like for their seeming to border on suggestiveness or sensuality, like Miri just happening to meet Ethan when he had is shirt collar loosened, and them ending up almost doing something inappropriate, when I doubt any gentleman would dare to present himself to a Lady in such a way.

The central theme of the story appears to be that of deceit and its impact upon the characters’ lives and story, in which the actions and deeds that have sought to run away from or hide from others both threaten to destroy them.
Whilst it is easy for the characters to grow attached to the protagonists, and vouch for them through their struggles, their exact circumstances may not be such as most readers could relate to. Most people don’t have to conceal their siblings’ descent into violent lunacy after all, though the hopelessness of a life without God, and the necessity of trusting in him are themes which could speak to many.
Yet, maybe somehow there were aspects of the story which were lacking. I felt for instance that as much as the author wanted to make this book ‘grittily’ realistic, it had some of the same problems as her previous titles in this regard.

I’m not really familiar with this period at all, but I did feel that is that the nastiness and unpleasantness of the setting and circumstances sometimes seem a little exaggerated and overdone, especially in the later part of the story.
18th century London may have been an unpleasant place to live for the poor, but I don’t think all the poor areas were entirely squalid, vermin infested slums, and the period was that of the Enlightenment so I found the descriptions of the conditions and treatment of inmates in the asylum to be a little implausible.
And would people with facial disfigurements really have been consigned to an insane asylum? I don't know. Also the villain seemed to be able to get away a little too easily with unlawful acts like having someone imprisoned indefinitely without charge which was been prohibited even under the Magna Carta. I mean was every court official really so corrupt?

On a spiritual level, the Christian theme was well done, but the treatment of the gospel message and those who delivered it was not something I always felt entirely comfortable with.
It was Miri’s mad murderous brother, and other unsavoury characters who were depicted as delivering a message on sin and condemnation, but the ‘good guys’ who gave one focusing more on mercy and love. This did seem a little like watering down, or as though the former was presented as a ‘bad’ way of preaching what is an integral part of the gospel.

Altogether, Heart Deceived is a worthwhile read with an original plot, despite some shortcomings and reservations I would recommend it.
I received a copy of this book from Netgalley for review. All opinions expressed in it are my own.