The Comrades of Honor Series by Alicia Willis

The Comrades of Honor Series is a Medieval Adventure trilogy by Christian author and historian Alicia Willis. The series is advertised as "detailing the lives and thrilling adventures of several young men and women during the Middle Ages. Courage, loyalty, respect, and chivalry flood each page, thus coupling Godly character with exciting plots and often little-known historical facts."

Considering how some Medieval novels for the secular market seem to fall short in many ways, it is good to find some in the Christian market.
However, being Christian does not mean a story has to compromise on those values which make for first rate Historical Fiction such as solid research, realism, a faithful and accurate rendering of the past, and of course a good well-told story. The Comrades of Honor Series even has its own website which can be visited by clicking the link.


Thus without further ado, here is a little introduction to her Medieval novels:

Book One: To Birmingham Castle, A Tale of Friendship and Adventure 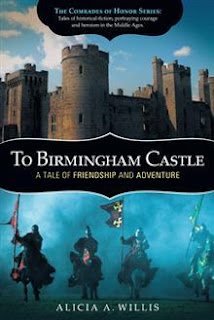 "The time is the Middle Ages, a time of clashing arms, valiant knights, and intriguing castles. Join Robert Fitz Hasseltine, a young nobleman of unchallenged character and the heir to his uncle's vast earldom. Valiant, yet merciful, Robert's steadfast determination to aid the weak brings him face to face with several individuals who urgently need his protective care--individuals who must throw themselves upon his compassion and rely on his strength to overcome their pasts and lead successful lives.

Yet the days are volatile, and danger lurks on the horizon. There are dangerous enemies who hate Robert's steadfast character and ever-present mercy--enemies who would do anything to vanquish his compassion and shower their malice upon his cause. A thrilling adventure commences, coupling victory, peril, friendship, and rivalry. During his eventful journey from squire to knight to earl, Robert's courage is strongly tested and his strength challenged. Will he be able to overcome the enemies that beset him and proclaim himself the undisputed lord of his shire? And, above all, will he abide true to his resolve and prove to be a kind, considerate master?

Join Robert and his steadfast friends, Brandon, Strephon, Nathaniel, and Narcissa, in their long journey of friendship and adventure, and experience the thrilling perils of life at Birmingham Castle!

A novel of adventure, suspense, friendship, and courage, as a young man embarks on a perilous journey to overcome tyranny and reform chivalry in medieval England.".


In just a few weeks the  second book in the series is due for release:


Book 2: In Search of Adventure, A Tale of Courage and Devotion 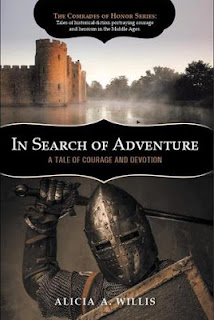 "Enter In Search of Adventure, the thrilling second installment of The Comrades of Honor Series! Packed with action at every bend, this tale takes up the story of Nathaniel de Lance, once the page of Sir Robert.

Now a young man and belted knight, Sir Nathaniel takes young Kenneth Dale for his squire, a boy left destitute by a stroke of ill-fortune. Quickly learning to trust and care for each other, Sir Nathaniel and Kenneth become fast friends, little knowing how much they will need their mutual comradeship.
Taking advantage of his liberty as a knight, Sir Nathaniel leaves his boyhood home to visit old friends. The small journey quickly takes an unexpected turn, however, and climaxes into a perilous adventure. Old enemies revisit the scene, creating hazards that require all of Sir Nathaniel’s strength and valor to overcome. Trapped in a hostile country, the question arises: Will he ever return?
Join Sir Nathaniel and Kenneth in their rousing adventure and witness the perils that strengthen their courage. Their friendship is extraordinary – but will the rewards of their devotion be greater still?
A novel of adventure, comradeship, and suspense, as a valiant knight seeks to overcome his merciless foes and retain honor in a hostile land."


I only discovered Alicia's work fairly recently through a list I created on Goodreads.com in which someone had voted for her first novel To Birmingham Castle.
Though I was not home-schooled like Alicia, much of the history I learned between school and University was self-taught, and I hope to become a historian one day (if almost being a BA Graduate in Medieval History does not qualify me as one already).

For me, a genuine understanding of the past and of the people who lived it is also an important ingredient of historical fiction, as the imposition of modern beliefs, standards, values and ideals onto the past is something I find incredibly irksome.

So seeing that one reviewer commended Alicia's work as presenting a faithful picture of the values and mores of the time period commended her book to me. Needless to say To Birmingham Castle is somewhere near the top of my To Read List, I might even have the honour of being be the first English person to review it...