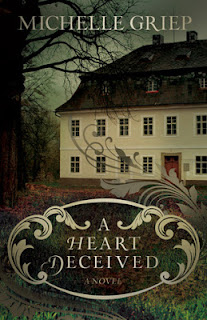 The use of unusual period terms and phrases can add that certain something to a novel (depending on how it is used and the overall content) and author Michelle Griep makes frequent use thereof in her new novel A Heart Deceived set in 1795 England.
The villain, Nigel Thorne, a well drawn and delightfully dastardly (apart from his murderous tendencies) individual loves to use period slang terms which would probably have been recognized by persons belonging to the disreputable circles that he frequents.

For the most part I had just passed over most of these in ignorance, but last week I decided to indulge in an activity which can bring me enjoyment, never mind enlightenment- word searching! Yes, I like words. I like looking up the origins of words, or the meanings of unfamiliar ones.
One particular scene in Chapter 16 is which Thorne is about his dodgy business provides some interesting material. At the Chancery Court (those familiar with Dickens Bleak House may know of it) our villain asks for 'a certain patent' from a young clerk.
My training in Medieval History has taught me what that particular term means. A Letter Patent was a type of official letter or document, its name deriving from the Latin patens meaning 'open' or 'accessible'.  In this sense it meant that the document was meaning 'made public' originally it meant a letter that was not closed with a seal, and so could be read by anyone.

In the chapter in question, the patent was a document like this which had something to do with the matter of an entailment. My historical training came in handy there too- I know 'entailment' generally
had to do with the inheritance of land or property.
Thorne however runs into trouble when he comes face to face with the Barrister who is in charge of the case, and on being asked who he is advertises himself in his capacity as a Bailiff as a the best  catch-pole and shoulder clapper in the land. 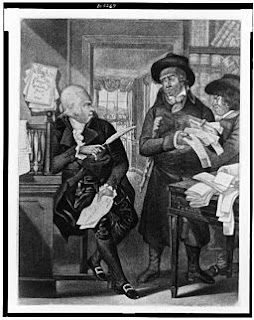 Bailiffs do exist in America of course, and the office existed in the Medieval period in several European nations but in good old England they were officers or officials whose duties could involve arresting criminals, and collecting fines, among other things. Even today in England bailiffs may be sent to the homes of an unfortunate individual who cannot pay their taxes with the power to seize goods.

So what exactly do catch-pole and  shoulder-clapper mean? Both are terms that Mr Thorne uses to refer to himself. The first, according to Wikipedia is identified under the surname derived from the term- surprisingly Catchpole, and is said to have originally referred to 'a type of tax collector in medieval England'. To elaborate further:

"At that time, tax-gathering was contracted out, a system called tax farming. The catchpole paid a lump sum to be authorised to collect taxes from a given area or population, and was then able to keep whatever he could extract, using almost any method he came up with.
Later, the duties of the 'catchpole' were those of a legal official, working for the bailiff. He was mainly responsible for collecting debts, using methods hardly more restrained than those of his tax gathering forebears.[1]"

So what of the second? Finding the meaning of this could prove a little more difficult as clapping a person on the shoulder can be a friendly gesture, and Nigel Thorne is most certainly not the friendly type.
The Merriam Webster dictionary shed some light on the term where it is listed as an archaic term for a Bailiff, and another site fromoldbooks.org gives its meaning as 'Sergeant or Bailiff', and perhaps was some reference to the action of arresting someone.

So essentially ol' Nigel was just using another name for a Bailiff, (but making out he was a very good one) with a good capacity for the duty of collecting taxes, and bringing in persons sought by the law, as per some of the traditional duties of the role.
Hopefully, this foray into the more obscure oddities of English Vocabulary may prove profitable (at least to people who read A Heat Deceived or were curious about what these terms meant, if the reader is not too lost, confused or asleep by now.....