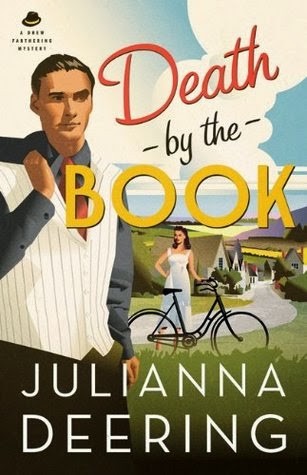 Another outing for the delightful Drew Fathering brings the inevitable mystery, and large serving of intrigue and a helping of romance… as well as the return of some other memorable characters. The indomitable Chief Inspector Birdsong, loyal and ever-reliable Nick Dennison and of course the lovely Madelaine Her formidable Aunt Ruth also makes a dramatic entrance, determined take Madelaine back to America and away from the supposedly harmful influence of Drew.

He however has proposed to her, and is determined to stay at Fathering Manor until she makes a decision. Of course, the genre being what it is murder soon ensues and all the inhabitants are caught up in another investigation. Its hard for thus mystery buff to fault the story itself with the collection of cryptic clues, red herrings, false leads, assorted suspects and motives, and an unexpected culprit.

However, as with the last installment Death by the Book I couldn’t help feeling the body count was rather high. It almost seemed as though when the pace of the book began to slow, another murder was thrown in to maintain interest- and that for me is not necessary or pleasant.
Also, there seems to be an awful lot of crime and intrigue for a small Hampshire village-considering how even today the city if Winchester. prides itself on being one of the safest places in the UK- with one of the lowest crime rates.
That said, I did take some pleasure from the regional setting, recognizing some of the Winchester streets.

Also, again I didn’t feel Drew and Madelaine’s behaviour was entirely consistent or logical. Aunt Ruth wanted to keep them from doing anything inappropriate. considering how they seemed to constantly end up kissing or displaying more intimacy than would have been acceptable between and unmarried couple at the time. Though they insist they’re not doing anything wrong – and generally are not- and protest much I for one could not help siding with Aunt Ruth as the moderating influence.

There was also the Christian content. Not ‘in your face’ or cliched, but sometimes hardly there at all. Its touching that Drew uses his new-found faith to help people, or say a timely word here and there, but I didn’t like the way that often misquoted and misunderstood scripture passages were used. I have been taught for instance Jesus didn’t condemn the woman caught in adultery because he had not witnessed the act- but he also told her to ‘go and sin no more’.
It seems to me many Christians ignore that part of the passage.
In my opinion it is not ‘judging’ or unchristian to tell a person their actions are wrong, harmful or damaging if that is the case.
Finally, whilst the American author generally did a spiffingly good job of accurately representing the speech and accent of the English characters without too many stereotypes there were one or two noticeable errors. For instance Drew and Nick say ‘someplace’ rather than ‘somewhere’ which is the term commonly used in Britain.

Overall, a good mystery with more than a passing nod to the classics, but also one which left me unsure whether I want to continue with the series. To see Drew and Madelaine’s relationship develop perhaps, but not if there are quite so many murders….

Thanks to Netgalley and Bethany House for approving my request for this book in exchange for an honest review. I was not obliged to write a positive one and all opinions expressed are my own.