The Falcon and the Sparrow, Marylu Tyndall 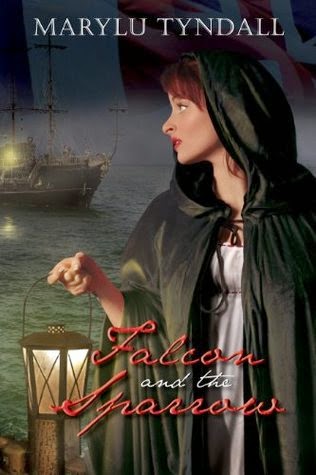 The second book I have read by Marylu Tyndall was sadly a disappointment. I didn't really enjoy Veil of Pearls and but gave The Falcon and the Sparrow a chance, one reason being that it is the only one of her novels set in Britain, but also because I did not want to give up on her work completely.

It had a promising beginning and premise, but was neither an especially good spy cum mystery novel nor a quality romance. In some respects, it had many parallels with the other, including assorted bunch of leering and lecherous aristocratic men, or jealous and snobbish aristocratic women one of whom was after the guy who was really falling for Dominque, a woman hiding the truth about her past or identity. Also a hero who has lost his belief in God because of suffering or difficult circumstances. Not an especially original characterization in the case of the last, and the former giving the impression of a somewhat formulaic or cliché ridden story. Also, the consistent depiction of almost all wealthy/aristocratic characters in such a way does make me wonder if author dislikes the upper classes as a whole.

The romance was fairly typical for the genre with a nice Christian partner falling for the hurting and unavailable/unsuitable other half. There were too many coincidental nocturnal encounters in unbuttoned shirts or only a nightgown for my liking, and the romance bordering on inappropriate or verging on the racy or even obscene. The attempted rape scene was almost enough to tip it over the edge- there are other novels which involve such things, but the way they were written did not seem appropraite. In fact it came across as obscene, almost stomach- turning.
With everything I did feel uncomfortable reading the novel on some occasions. Not good for Christian fiction.

I'm not certain how accurate the setting was, and the historical details were at times interesting, but other deficiencies detracted from this. As with other books, I felt the descriptions of the supposed dirt, unhealthiness, unpleasantness and squalor which supposed blighted most cities throughout the `old days' was exaggerated and overdone. Even affluent areas like St James' Park stinking of manure, seriously?

Dominque's nocturnal wanderings in seedy areas of London seemed a common enough occurrence for some books in this genre. Yet not clever at all so her almost getting into trouble was hardly a surprise- until the mysterious man who was quite obviously an angel appeared to protect her.
I don't mean to appear facetious or irreverent, as the scripture does teach God can send angels to protect his people, but this happened in Veil of Pearls too so it seems to be quite a frequently used device, almost making it seem like an easy 'get out clause'.

I thank the author for emailing me the Kindle edition after alerting her to a copy uploaded to the internet without authorization, but due to two bad reading experiences I sadly do think I will steer clear of her books in future.