I have decided it’s time for a new feature, to fill those gaps when I’m not reading fiction and don’t post reviews for a while because I have vitally important academic research, Latin practice, or whatever other reason. So what better an idea for a occasion piece entitled ‘Historical Saturday’, devoted to tasty titbits from the past (hopefully) related to the general subject matter of this blog?


So here is my first try, which I admit is in part based on an article I wrote for an author’s newsletter. Hope she doesn’t mind…..

We must all have encountered it at some point, for it is probably the oldest cliché in Romantic Fiction. The pretty young girl forced into a marriage of convenience with a man she has never met that is usually horrible, abusive, old or in any other undesirable. The Medieval Era seems particularly associated with such circumstances, to such an extent they have become something of an established ‘fact’ in the popular imagination.

Indeed, even an educational page on the website of the Medieval Times park states that:

“In Medieval Times marriage was quite different than today. Women didn’t have a choice as to who they would marry, and, most of the time, women didn’t even know the man before they wed”.

Yet just how much truth is there in such assertions, and what was marriage really like for the men the women of Medieval Europe?
As with most things in history the customs, practices and laws surrounding Medieval Marriage was not as simplistic and straightforward as they may seem.
Firstly, forced marriage was not necessarily the norm. The eleventh century Law codes of Canute (the first Danish King of England who ruled from 1016- 1035) state that:

“neither a widow nor a maiden is ever to be forced to marry a man whom she herself dislikes, nor to be given for money, unless he (presumably the husband to be) chooses to give everything of his own free will”.

So technically “by at least the eleventh century consent was regarded as necessary for marriage by both church and state”. Throughout the period which historians refer to as the High and Later Middle Ages- about the eleventh to the sixteenth century, the rule of consent proved vitally important.
William Langland, in his allegorical commentary on 14th century society Piers Ploughman even stated that a proper marriage truly in accordance with the will of God ought to "begin with the consent of the couple’s fathers, and advice of their families, followed by the mutual willingness of the pair themselves".

In fact, the rule of consent could prove problematic, as the stories such practices as a men exchanging vows with a women in the pub in order to go to bed with her demonstrate. Such may not be entirely accurate, but records show that cases of questionable marriage did come before church courts in England. One such case was that of Marjorie Paston in the 1400s, who had secretly married the family bailiff. 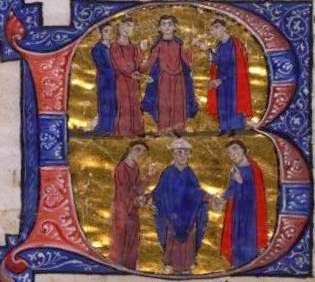 Though originally of peasant stock, the Pastons has climbed the social ladder to become lawyers, landowners and even members of the royal court. Yet they were not nobles, and were anxious to protect their status, so Marjorie’s mother would not have approved of her marrying a man ‘beneath’ her.
When said mother found out, she tried to have the arrangement declared invalid, but the local Bishop of Norwich does not seem to have been so easily swayed “because he was convinced that it was entered into voluntarily”

So what about marriage to strangers? Well, evidence seems to show that many people married within their own social circles and communities, but parents clearly did have had a deciding role in bringing their children together. Crucially, however:

“in respectable circles … courtship customs allowed the would-be couple to get to know and like each other” before they married.

It was quite possible that couple may not like each other, or could at least in theory refuse the match in defiance of their parents. This might land them in trouble, but it certainly does not seem to suggest they had no choice.
There are also some famous examples of loving arranged marriages one of the most notable being that of King Edward I of England and his wife Eleanor of Castile. His devotion to his wife is so well known that is “has become something of a legend”. After her premature death he commissioned gilded monuments, known as The Eleanor Crosses at every place where his Queen’s funeral entourage rested on the way to her final resting place of Westminster Abbey- where her tomb may still be seen today.

Of course, not all arranged marriages were happy, and the laws and social customs recounted above were not always universally observed. Langland again lambasted those of his time who contracted "unions purely out of greed to get hold of property’ and expressed disgust at ‘a young girl paired with a weak, worn out old man".

Such things were clearly still happening in his Langland’s day, but this did not mean they were universal. In any age there will be those who contravene the law to fulfill their greed and selfish ambition. It may however be possible to derive some encouragement from knowing that happiness in marriage and courtship was not necessarily a remote fantasy for out medieval forbears. Admittedly, there may be less dramatic tension in nuptial happiness, but perhaps it is time the other side to the story was told?
References