'In My Defense' Leigh Ann Byrant 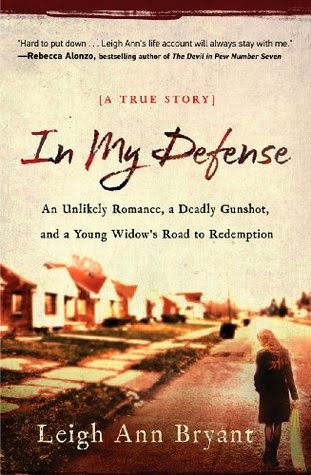 "When Leigh Ann pulled the trigger . . . her life changed forever. On a balmy night, everything changed in the stilling of a heartbeat . . . During Leigh Ann's psychiatric clinical work as a nursing student, a patient swept her off her feet with his dazzling good looks and charm. But soon after marrying Mr Right, things began to go horribly wrong. Believing the best of the man she loved, she endured the heartache and abuse until his threats turned deadly.

On the night of September 16, 1994, Leigh Ann Bryant, fearing for her life and that of her young son, shot and killed her husband. Panicked and afraid of retaliation, she told the police an intruder had committed the crime. Indicted for murder, and subsequently jailed, Leigh Ann's journey of desperation miraculously turned to one of ultimate healing."In My Defense" is for anyone who has felt alone or hopeless at the hands of abuse - whether it is emotional, physical, sexual, or spiritual. It offers tangible hope for victims - and those who love them - who are earnestly seeking the light of healing and freedom. Leigh Ann's story will grip and shake you, and never let you go."


As per the synopsis, this book tells the story of Leigh –Ann who meets the person she believes to be the man of her dreams whilst training, and after a whirlwind romance they marry. The marriage turns out to be marked with abuse and obsession, until she desperate measures to protect herself and her infant son with fatal consequences…

In My Defense was touching true life story of hope and redemption for a woman whose life had been marked by bad choices, and heartache. In some ways, some of the author’s decisions appeared illogical and almost unbelievable. Why did she not see the danger signs with Vincent earlier, why did she not tell the truth sooner? However, for those who have not faced such circumstances (thankfully many never will) it’s all too easy to pass judgement on a young lady whose deep seated need for love after a difficult family life and traumatic youth drove her into the arms of the first man who seemed to offer it.

Her intense love and fear mixed with loyalty for the man who abused, whist wanting to win him over and change him her reflect the reality of many people (both male and female) who have faced such abuse in relationships. Thus her story is genuine and recommended for everyone. People who have a background in social care or working with abuse victims might find it particularly interesting to read the testimony of a survivor.
It would also be too easy for Leigh-Ann to have vilified her former husband, but she did not, and that it itself I found commendable. Her love was genuine, was was her remorse.

The writing style admittedly was not the best ever. The short chapters allowed for a quick read, but the style was sometimes rather matter of fact and narrative, and there did seem to be some gaps which could make the course of events seem a little inconsistent. One could however identify with the author and her plight, especially when faced with the apparent ineptitude of her legal team. Leigh Ann’s story and journey also conveyed some valuable messages about the necessity of endurance in difficult circumstances, and not viewing faith in Christ as simply an easy way out or little more than ‘fire insurance’.

A challenging, difficult, yet necessary and ultimately encouraging read! I received a e-galley of this book from Netgalley for the purpose of review, all opinions expressed herein are my own.