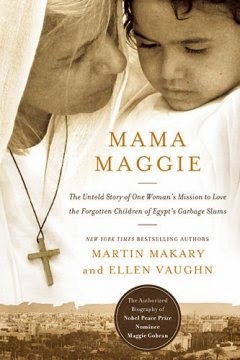 From marketing maven to angel of the garbage district—the inspiring authorized biography of Maggie Gobran, the “Mother Teresa of Egypt.”

Since 1997, Maggie Gobran and her organization Stephen’s Children have been changing lives in Cairo’s notorious zabala, or garbage slums. Her innovative, transformational work has garnered worldwide fame and multiple Nobel Prize nominations, but her full story has remained untold—until now.

Bestselling authors Martin Makary and Ellen Vaughn chronicle Mama Maggie’s surprising pilgrimage from privileged child to stylish businesswoman to college professor pondering God’s call to change. She answered that call by becoming the modest figure in white who daily navigates piles of stinking trash, bringing hope to the poorest of the poor. Smart and savvy, as tough as she is tender, Maggie Gobran is utterly surrendered to her mission to the “garbage people” who captured her heart.

At her request, the book also spotlights the people she serves—the men, women, and children who prove every day what a little bit of help and a lot of love can do.

This book told the inspirational and fascinating story of the work of Mama Maggie, described by some as Egypt’s version of Mother Teresa. It must be said, that I am no fan of the latter, but I do think that the work of this Egyptian Lady and his ministry is comparable with those of some of the great Christian Charitable founders of the past, like William Booth and Dr Barnardo.

The devotion and self-sacrifice of Maggie and many of her co-workers, who chose to forego lucrative careers, or give of themselves and their time to help the people who dwell in Egypt’s slums is challenging and touching. I found myself highlighting a number of passages, highlighting the emptiness of chasing riches and success, and being distracted by worldly concerns.

I did have a few concerns about some passages, which seemed to suggest that Stephen’s Children does not attempt to convert or preach the Gospel to non-Christians, focusing on positive thinking, self-worth and telling everyone they are children of God. We are all God’s creation, but the scripture seems to be quite clear its designation that only those who are believers in Christ are God’s children.

It seemed that many Copts, although identified as Christians, had not even heard of Jesus and knew nothing about Christianity. For these, the work of the ministry does seem to be genuinely transforming people’s lives, including those with harrowing stories of abuse and drug addiction, by bringing them to the Lord, and it does seem as though Maggie is a true believer.

Altogether, a worthwhile and truly inspirational read, even if the writing style is not the best. Recommended.
I recieved this book free from Thomas Nelson via Booklookbloggers for review. I was not required to write a positive one and all opinions expressed are my own.

About the Authors
Dr. Marty Makary is the New York Times best-selling author of Unaccountable: What Hospitals Won’t Tell You and How Transparency Can Revolutionize Health Care. As associate professor at Johns Hopkins University, Dr. Makary has written for The Wall Street Journal, Newsweek, and CNN.com, among others.

Ellen Vaughn is an award-winning author whose works include The Strand and Gideon's Torch, co-authored with Charles Colson. Former vice president of executive communications for Prison Fellowship, Vaughn has also served as a speech writer and fund-raising consultant. She and her husband, Lee, live in Virginia with their three children.